The weather here today, grey and overcast, seems to sum up the way we feel; because yesterday one of the girlies died very suddenly. It was a beautiful sunny day and Rich went to let Claude and his girlies out, but the dark brown chicken was just standing on the water dish looking very vacant. She had been fine the day before but Rich knew that there was something wrong because she let him stroke her and looked at him as if she did not know what to do. She did not eat (and she was a girl who liked her food!)  and simply lay in the doorway of the shed all day puffed up and asleep.

By the early eveningm when she still had not moved Rich, my gentle, kind and caring husband, went into the pen and gently picked her up to inspect her, there was no sign of anything being wrong, but she just let him look at her, made no sound or attempt to get away. So Rich carried her over to the water butt and gently rubbed her beak with water trying to get her to drink; alas she would not take any water. I will always remember her face though, as he gently rubbed her beak with water and she closed her eyes as it to say that is so nice, thank you for being kind. After that Rich decided to put her to bed and carried her into the shed and put her in her favourite place, but as he put her down she just fell over and he had to pick her up and place her in her nest.

Later as the night drew in he went to shut the chickens up  she was laying with another girly, who was clearly trying to warm her up, but to no avail, as she had already died, her eyes were white and her head was lolling over her nest.

When Rich came back into the house we both had tears in our eyes, you see we love all our animals and she had been with us such a short space of time. But, as I said to Rich, she had a good summer with all her sisters and Claudy, in a huge pen, pecking Welshie noses (she was the feisty one!) eating snails, pears and she loved a chip or two!! She was always at the lead investigating grass tufts for insects,  and she had the Hilton of chicken houses to live in. She had grass to dig into, and tree trunks to climb and lots to see with 360 views. Her last days were good days.

But today as I pegged my washing out the weather matched the mood of us all, sad and melancholy, another reminder to live every moment because things can change in a heartbeat. The other girls had eaten some food, as had Claudy, but they kept going into the shed to look for her, and were clucking at Rich as if to tell him that something was not right.

As if in memoriam the clematis that are growing by their run, had burst forth with  some late flowers, as a tribute to the girl who had left. 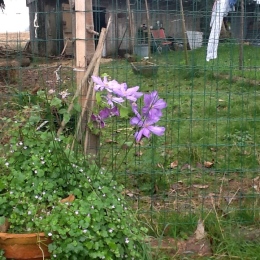 We have decided that she will have a funeral pyre (in the burny bin!) as living in the countryside this is the best thing to do, to prevent attracting predators, we do not want to lose any more, and as she says her final farewell we will hold a wake for her in the garden, with a glass of wine.

I know that life is all about death, what goes around comes around, and it is poignant that she died at this time of year, when so many things are dying, and the land is going to sleep, the autumn took her with it. Another reminder that this is the end of another year, who knows where we will be next, any of us? So do me a favour, raise a glass to the girly tonight and wish her well on her way, she may ‘just’ have been a chicken, but she was our chicken and we loved her.

6 thoughts on “Obituary: A farewell to one of the girlies”