As autumn draws to a close and the trees are now clinging to the last of their leaves I thought that I would share with you some of the images that I have captured during this season.

I woke up to an incredibly misty day today, the sun fought a valiant fight to break through but was, alas, not as successful as she has been over the past few weeks when we have had temperatures up to twenty-two degrees; Rich and I could not believe that we were in the first weeks of November as we planted out our bluebell and crocus bulbs for next year, one hundred and ten in all, but in our garden I fear  that they may still be a little lost. It didn’t help that I was being “assisted” by a Welshie who thought that he needed to dig them back up for me because I had lost them!

During the season we have visited the town of Mayenne on a number of occasions, lunching outside, having coffees and walking around the castle that overlooks the river Mayenne. On our last visit the swallows were gathering, swooping high and low over the medieval cathedral, preparing for their long flight south. They were a breathtaking sight, of course I took a photo to share with all my readers. 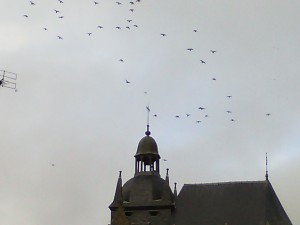 Nature never ceases to amaze me, one week a tree with bright red leaves and the next with no leaves at all. I suppose that it is her way of reminding us that things can change so quickly, and we should cherish each day for what it holds, not constantly look forward to the next, because what you think will always be there may not be there in a blink of an eye.

I hope that you enjoy the pictures I have included in this blog they show the gardens in the castle of Mayenne and the views over the river and of the City. I have also included a picture of a tiny Hamlet called Le Ham where Rich and I provide some work.

I did try  to get our beautiful Welshie Harley to pose in the leaves, but as you can see, being a typical terrier, he was having none of it and just kept giving me the bum steer!!!

On the subject of Harley look out for up and coming posts as we have some news about additions to our furry family, one of the reasons why we have been so busy.

I can honestly say I have not been disappointed with this season and will cherish it to the end of the season, and all it has to hold. 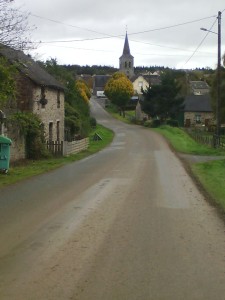 I will be starting some new tags over the next few weeks, called “The Good”, “The Bad”, and “The Ugly.” I did promise some controversy!