The new addition to our furry family

This is Squiggles (Iona is her  offical name but as with all Welshies she will answer to what she wants. Squiggs is her main name.

Some will already know we have a Welshie (Welsh Wire Haired Terrier) called Harley, who we re-homed just over two years ago. We adore him, he is very very handsome and as you can see he loves us lots. Here he is cuddling his dad after he got home from work. 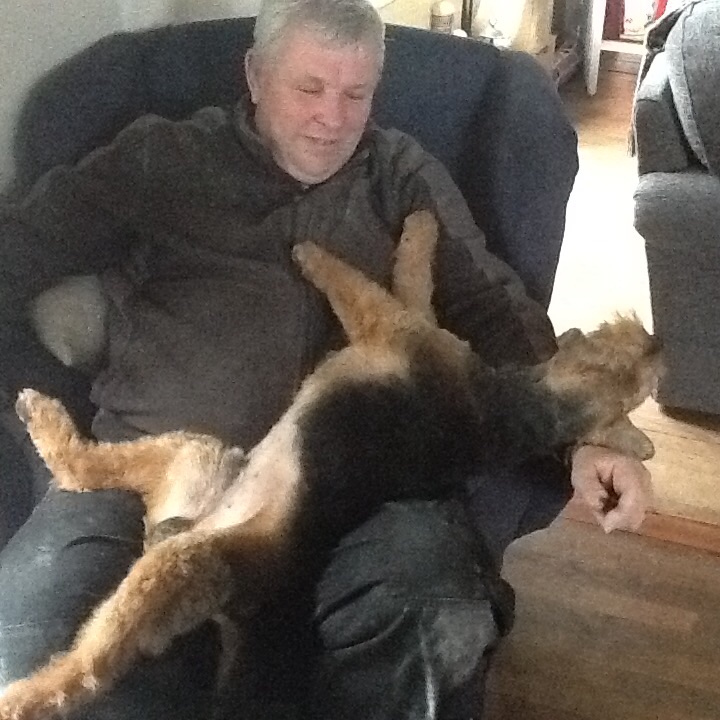 Welshies have strong characters and personalities, can be independent, can  put themselves to bed at 8pm without so much as a goodnight, and  be known to chase cats. But do they love cuddles and loves.

We were approached to give Squiggles a home by someone who knows us. She is just over 2, but very puppyish, and had to be re-homed due to problems with other dogs in her house. She had already been re-homed once but they could not cope with her, as I said they can be headstrong, and she was given back to the lady that originally bought her. She  likes us to sing the tune to “I’m sexy and I know it” especially the part where they sing “wiggle, wiggle, wiggle, wiggle, wiggle yeah.” (think of the Specsavers advert) to her. Although initially when she first came to us (just under 3 weeks ago) I think she thought we were mad because of the way we treat our animals (they are our family) she has now come to realise that she will have many cuddles and loves and as you can see from her picture she loves them now.

To watch her and Harley in the garden, playing tug of war and zoomies around and around the garden is a joy. She is coming round with the cats, and although she was an escapee on the second day of coming to live with us we have bought 100 tent pegs and made the other side of our garden safe. Prior to that the garden looked like Steptoe’s yard with the gates leading to the chemin blocked with a palette, 3 flower pots, the bin, a roll of fence, an old oven dish and a lump of wood. Still the new “Oliver Twist” of the family found a way through! Now we have spent all of Sunday blocking it off she is not interested in going over there now!!! She is also afraid of the dark and at night you can here Harley over the other side of the garden but not her, she sits in the light of the doorway and doesn’t go outside of it.

We cannot believe that we are now a two Welshie family, but wouldn’t change it for the world. There is something about re-homing or rescuing a dog, or any animal, watching their personalities change, and feeling so privileged and, yes, good about yourself when that dog shows that they trust you. There must be something!