Christmas in the Mayenne

Christmas here is very different, not as commercial, and seems to be more focused around food. At Christmas fish is a main theme of festive food and the shops are loaded with oysters, snails of the sea, crayfish, crustaceans galore, there is even small little polystyrene boats that you could fit a child into, the aim being to load them up with shellfish, I kid you not!  I have to say whilst we love shellfish we are not indulging other than to have salmon and prawns for our starter tomorrow.

A couple of weeks ago Rich and I decided to visit  Mayenne and savour the Christmas lights, with two naughty Welshies of course. Although simple the lights were very pretty, reflecting on the water along the Mayenne river. 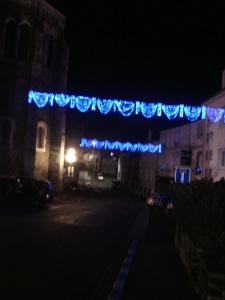 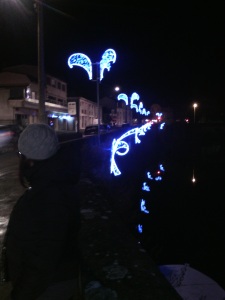 Earlier this week we found another box of Christmas decorations that had been missing (that is one thing about packing your life away it’s like a treasure trove when you find something you had forgotten you had, or suddenly remember that you had something and wondering where the hell it is now) we found Harley’s Santa’s little helper suit and various Santa hats that we had bought him in the past. We decided to put the little helper suit on Squiggle piglet, as she is now affectionately called, bless her it was a bit snug, and we couldn’t get it done up. She was not happy and as you can see refused to look at the camera, but at least we got her in front of the tree. Harley on the other hand had his Santa hat perfectly situated, but refused to stand in front of the tree and we have a lovely photo of him in front of the bin and the decorations box!!! Welshies wilful little buggers! Squiggle piglet has now spent the last 2 days trying to steal the suit and hat and chew the bobbles off. She is so naughty.

Rich and I have just opened our 2 boxes of chocolates that we both picked, have cracked open our 10€ box of wine and will later be sampling our Irish named bottle of cream liqueur from Aldi and honey whisky from Lidl. We spent 15€ on each other and both said how we enjoyed just buying small gifts, more than we have in these past few years. We’ve spent about the same on the puppies because they give us hours of joy watching them playing. As for the girls (the collective for our cats) we have found the toys that they were brought last year, but didn’t get to play with because of the move, they’re having them again, I’m sure that they won’t remember!

So here’s to a wonderful Christmas, however you plan to spend it, I would like to say thank you to the many people who made contact to say that they, too, would be having a much more family focused, less consumer led Christmas, from making things for each other to realising that they have enough material things and just need each other. I am sure that they will enjoy it all the more.