Now for those who have been following my blog you will understand why we now have a whole part dedicated to the growing of cucumbers.

For those of you new to my blog, welcome, and you may want to look at some of the posts in “The Good Life” tab, and also “Ooh Barbara it’s gone Pete Tong!” and you will understand my obsession with cucumbers.

I love cucumbers, but the ones in the shop taste nothing like the home grown cucumbers that you used to be able to buy. So after successfully growing them once I intended to grow many when I moved out here. But last year I planted courgettes by mistake (someone in the supermarket had a huge laugh swapping all of the labels around!!) Then, this year I bought two cucumbers and before I had a chance to plant them they died!! So I thought “Sod it!” And I went out and bought a cucumber for the huge sum of five euro that already had tiny, tinky (or as the french would say petit, petit) cucumbers growing on it; and guess what? Success!!!!!! 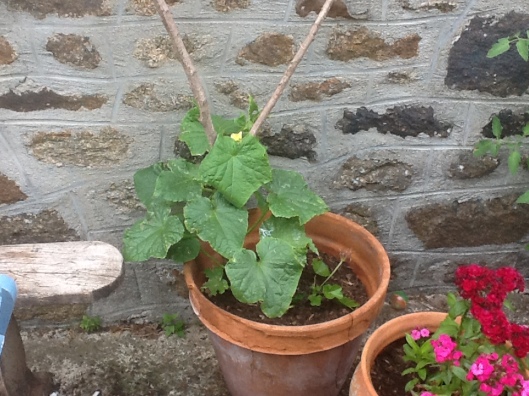 I now have seven cucumbers growing on my plant, and have already scoffed this wonderful specimen that I picked a week ago. In fact it was so delicious that my husband, who’s throat I normally have to shove salad down, made himself a ham and cucumber sandwich without any prompting from me. That is how delicious home grown cucumbers are.

I am so proud!

But seriously my plan to revert back to growing peppers, tomatoes and cucumbers in pots on my terrace, that reaches over fifty degrees all day on hot days, is working. So watch this space for more updates.

As some of you know we also have a mass of cherry trees, some which come to fruit sooner than others and Rich went and picked these last week, all of which have been shared with our neighbours.

So next year I will be one step ahead and have enough jars to make cherry jam. I am learning fast that French people let nothing go to waste, and I love that concept. Nothing goes to waste in our house, the chooks have the leftovers, the vegetable peelings go on the compost, along with the middle of toilet rolls and tea bags, and we eat what we have got. Only the other day I could hear my dear friend in my head when I reached for a basil plant saying “What are you buying that for when there is  basil available in my garden?!” I put it back!

But I do also have mint growing in pots and in the garden, and my little herb garden just outside the door made from an old sink from my Edwardian house that I brought over with me from England,  has chives, rosemary and trailing thyme. I also have sage in another part of the garden which was in the herb garden by was struggling in the heat and had to be moved .. 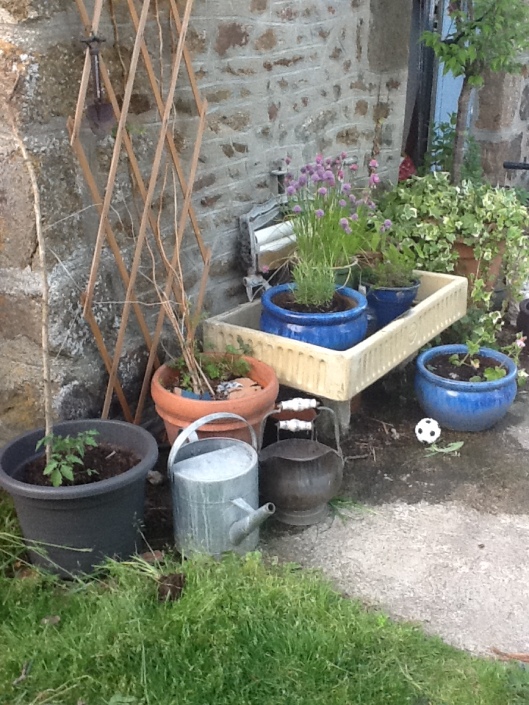 We have seven peppers currently forming on the pepper plants and I am hoping that, due to the heat, I will actually succeed in growing red peppers this year. The tomato plants are starting to have tiny little tomatoes on them, and we have a variety of both large tomatoes and cherry (or cocktail as they are known in France).  Add to that the three to four eggs a day that we get from the chooks and we are on our way to a “Good Life”, just so long as we don’t get sick of eating eggs! My next foray in cooking something new will be a fratata, with chorizo, onions, and peas. 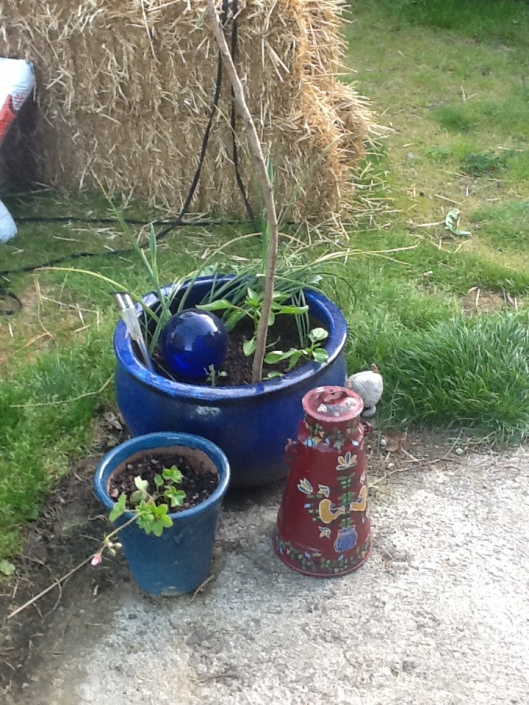 In the autumn we will have a ton of walnuts from our huge tree and cobnuts from the host of cobnuts that line our chemin. None will go to waste this year, we will share them with friends and neighbours.

This is one of the many things that I love about living here, it makes you think about everything you use, and how you can work with nature, who will give you all you need if you let it.

Some readers have asked for some recipes they will be coming, watch this space; and they may well involve cucumbers, tomatoes, peppers and cherries!! I will this year also make an attempt at cooking a walnut cake.