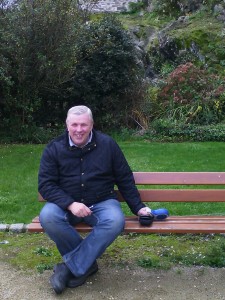 Squiggle piglet, the naughty Welshie, don’t be fooled by the photo

When reading the dialogue in this post, for maximum effect, please read with an Eastenders accent or Essex accent, as this is where we originally hail from. For those who are not au fait with these accents please see below for some guidance:

For what think wot

So much for my peaceful Christmas, our animals decided to have all out war in our newly renovated kitchen on Christmas day!

I would like like you to the picture the scene, my newly renovated (although not complete) kitchen all cosy, cats on top of the fridge (as you do if you’re an animal lover, and have 2 Welshies)  food laid out  around about, (deep and crisp and even) stock for the gravy, freshly cooked turkey and pork, sparkling wine that we had found and forgotten we had, all was well with the world.

We had had a lovely walk down “Le Rue” where we live, the Welshies had had their toys, and Squiggle Piglet had systematically destroyed the squeak in them all within half an hour! The fire was glowing, we had chilled  and were enjoying a small drink whilst I was cooking the dinner, eating the Brussels cooked in bacon from the pan.  We were so chilled and relaxed that Tilly came down from her fridge castle and had cuddles and loves. In fact she was so relaxed she just jumped down onto the floor (she is the only cat that does battle with the dogs now!) and sauntered over to the cat flap, Squiggle piglet thought she would just have a sniff of the ever elusive cat, and all hell broke loose, Tilly scratched her! Sqiggles then went for Tilly who was pinned in a corner and Harley joined in.

imagine everything in slow motion: Both Welshies now have the cat pinned in the corner I am intervening screaming Harlaaaaaaaaaay, Squiggles Naaaaaaaaaaaaaaw! I stuck my hand into the fray and Tilly ripped parts of it with her claws. This did however giver her time to make a run for it, up onto my open shelving,where my crockery and glasses are, knocking them all off in the process with me screaming Tillaaaaaay naaaaaaaaaaaaw!

Crockery and glasses were now smashing everywhere, falling in the meat, the stock. and everywhere else. Thank God I had put my prawn cocktails in the fridge (there is an irony there given I’m an Essesx girl!).

The Welshies were going mad, the cat made it to the fridge leaving a trail of destruction (not least my hand!) and Rich and I were left amid a sea of broken china and glass totally shell shocked. It was a close thing and we do love all of our animals, so we were more relieved that Tilly had got out alive.

We sort of gave up on Christmas dinner after that, had copious amounts of red wine, I then proceeded to flip my tray of Yorkshire batter over the kitchen, adding to the mess, made some more and burnt them! As I said copious amounts of wine had been consumed to recover from the shock.

A good Christmas was had by all!!! Rich said it was like being in an episode of Eastenders with me shouting Tillaaaaaaaaaay Naaaaaaaaaaaw; and he expected Phil Mitchell to walk in at any moment!

All is well now and later in the day the cats and the dogs enjoyed their turkey!

I hope that your Christmas was more peaceful.