Before I begin this post I just want to say a big thank you for the response to my last post, about exploitation in the workplace over here. It obviously touched a nerve with a lot of people, and the support was overwhelming. I also want to say a big thank you to my Facebook mate Tim, who asked if I had written a book and if so how could he get a copy. What a compliment. No I have not finished my book yet, but this has inspired me to start book number two about my adventures over here (which will include many other bits I do not put in my blog!) and thank you for the encouragement from you all regarding everything. Also a big thanks to Linda who shared my post because it inspired her regarding exploitation of workers. Good!!!

Until  the fourteenth century Spring was simply Lent, but the name Spring evolved when  people started to call this time of year Springing time,  referring to the plants springing from the ground, (I also like to think of the lambs springing about, and no! Stop thinking about mint sauce!!) and this phrase eventually evolved  into the name of this season as we know it, Spring.

Over the past few weeks, since my post on the 6th of March the garden is literally springing to life, the crocus have now gone and in their place I  have daffodils, narcissi, and grape hyacinth,  ( I had forgotten that I had planted the grape hyacinth the first autumn we were here!) not to mention the primrose that is prolific over here.

These photos also show our stone troughs that have been in existence since the house was built in 1812. Some people say that they are old coffins that were used to bury children!

Our first Spring here I thought it would be a great idea to buy some meadow flowers and just sprinkle them under the tress where the grass does not grow so well, and also over by our hedge. Sadly I thought they did had not taken, mainly because I had one lone poppy and no sign of any others and also because I think Rich mowed over them (including the bloody lone poppy!)  and also  because I was a lazy cow and just threw them at the dirt and hoped that they took without putting any effort in.

Well obviously nature took her course, the birds ate them, and then pooped them back out all over our lawn!! We now we have a sea of yellow flowers to join the primrose and the other plants ….. 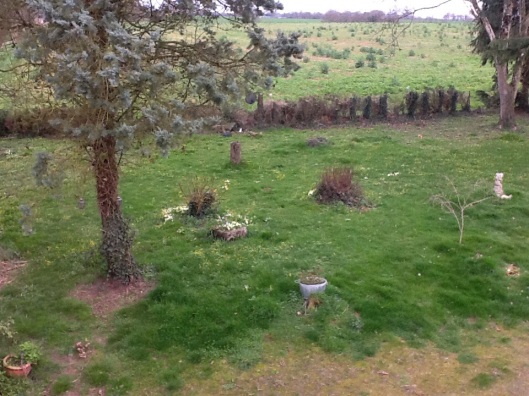 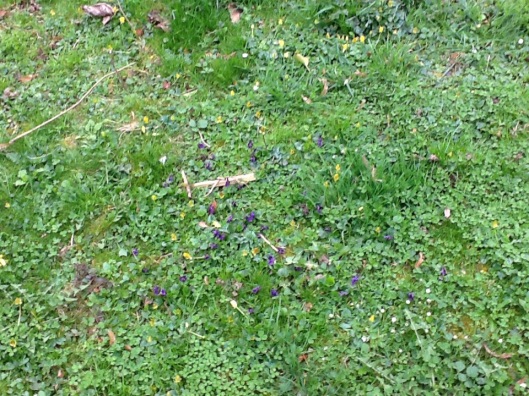 The only problem now is that they are all growing in the grass and the grass needs cutting!! So I think I will be helping Rich next week (we are busy this week) and will try and mow bits of the lawn and leave the flowers to have their day. If I don’t watch him he will just drive over them with the ride on and that will be that! The man’s a menace when he gets that mower between his legs (a feel a Frankie Howard moment coming on!)

The bush was on death row, as was her sister bush, we cut them back hard because they seemed to be boring and green (as plants tend to be) and were going to dig them up;  but as you can see from the previous picture they are actually Forsythia and have a profusion of pretty yellow flowers popping out. Looking it up it does say that it can be dull after flowering so were weren’t wrong really,  but I have decided they are too pretty to kill, and the remind me of my childhood home, because my mum had a hedge of them (weirdly i was only thinking of that hedge the other day and thinking we should get some because our garden needs to have different areas put into place to give it some structure only to get home and find that I already had it and was about to kill it!)  so we have decided we  will just keep them small.

We also have some fairy Kingdoms popping up again, sorry folks but I do like to think of faeries in my garden as you know

I love this time of year, it always reminds me that things will change, will get better, if you let them and trust that they will.

Here are to quotes to contemplate in this time of change and hope….

‘The Tao does nothing, but leaves nothing undone

could center themselves in it.

the whole world would be transformed

by itself, in it’s natural rhythms.

When life is simple.

our essential natures shine through.

By not wanting there is calm,

and the world will straighten itself…….’

Edited from the 37th verse of the Tao Te Ching

Isn’t that what spring shows us every year?  Bear in mind that nature never gets it wrong, even earthquakes, tornadoes and tsunamis have there place.

Let me tell you about the cherry tree that I have put at the beginning of this post. I have had that tree for seventeen years. It has always been in a pot and it was only about two years ago, just before we moved her out here, that I moved her to a bigger pot because she was struggling to flower. I had to tug and pull her, with Rich’s help because she was so pot bound, and she got really battered in the process.  I then cut her back hard for the move and just hoped she would survive. As you can see she has flourished and never gave up. Every morning I have at least five big fat furry bees buzzing around her, she is giving them life after the long winter. So she is happy because I helped her, she helps the bees and they all make me smile every time I see them. We are all happy, it cost nothing nature is just following her course.

Happy spring folks let it be the start of something new for you.

More posts are on there way keep looking out for them.