As you all know from my previous posts we have had serious problems with no water.

I always said that my blog would be an honest blog.  I set it up to inspire people who always say “Oh I would love to do that, you are so brave, but I just couldn’t.” Or those who say “I want to do that but I am scared.” to consider the adventure, consider living life to the full, as one of my favourite quotes says “my aim is not to live life and die with a perfectly preserved body, but to slide into the grave sideways shouting “holy shit what a ride!!” But to do this, to inspire people the honesty is essential and I am going to tell you today about a recent wobble. Rich’s recent wobble.

Since living here we have had what some may say bad luck, or as other’s say lessons to teach us how to move forward in life, and if you don’t listen to the lessons they will just keep happening, over and over again, worse and worse until you sit up and f*****g listen! What have our lessons been?: When we moved over we bought a truck specifically to help us with our life here. It was only a 2009 model and had only 59,000 miles on the clock. But the engine blew up less than a year after we got here! We had checked the oil, done all we had to but the engine still blew up!! But… a dear friend sourced a van for us, and do you know what? It is better than the truck ever was, and the truck sale helped us pay for the wood last winter!

Some of my readers may remember that in the March after we moved here we had a storm, and as our house is perched on top of a hill (hence the views you have to take the good with the bad!) it took our kitchen roof off; and then the insurance company refused to pay out because they said we had not maintained the roof, we had only just moved in! So we are going to learn how to replace our roof at the end of this summer  that has to be a good thing right?!

Then we had a tornado go through the garden and rip some of the trees apart and decimate our gazebo. We burnt the wood from the silver birch in the spring as they season so quickly they will rot if not used. We got firewood from it.

Whilst we knew our cesspit did not conform what we did not know is that it leaks into the cellar. So we have put some things into place to help this, not least spraying the cellar floor with bleach. You do what you have to do. We have learnt you won’t die from it!

Rich has had people tell him that they want him to work for him so many days a week and then been dropped without any explanation. But looking back they were not particularly nice people to work for and our lesson was that we only work for people who are polite and all the rude and ignorant bastards can sod off!! We did not move out here to humour arseholes any more!! (That has to be a positive right!)

In the past month as you know we have lost water – which is now on it’s way to being sorted out thanks to good friends, and we have a temporary fix; and whilst driving home from work the brakes went on Rich’s van and he was over a fourty minute drive away- but a wonderful friend fixed them for him the next day.

But at the end of June, beginning of July Rich began to feel down. He tried to be his normal cheery self but you could see in the morning as we sat in our ‘morning corner’ with our cup of tea that he was miserable. He would huff and puff, and when I tried to be positive he would just shrug; but I knew that he was in a bad place when he commented how easy it would be to hang yourself from a tree in our garden! In fact it frightened me. I asked him to tell me something good about living out here and he looked at me and thought for a while and then said that he could not think of anything.

I know that many people read this blog because they want the inspiration to make that change, I know because they contact me and tell me. But this blog is about explaining that wherever you live, no matter how good life may appear there can still be times when life just gets on top of you. Do you know the thing that pushed my husband over the edge, despite all the shit that has come our way (literally at times)?  He went down when the wheelbarrow got a puncture and when he fixed it, it went down again and could not be repaired. Seriously! Despite everything else it was the wheelbarrow getting a puncture!!

I have asked Rich if I can write this post and he has agreed because we know some people out there (as do we all) who are really struggling and we hope that by sharing what most people think will be perceived as a weakness it will help others, because trust me we all struggle at times.

The amazing thing was that I shared this with close friends and my sister and so many people rallied round. My sister called Rich and had a chat with him, our friend Karen called Rich and had a chat with him, my lovely and dear friend Jan just turned up with seventy five litres of water and a bottle of wine (perhaps she thought it was best to emulate Christ!) She sat in the garden and had a big chat with Rich. Another wonderful friend (who is considered as our mum over here because she acts like it!) called us from another continent when I emailed her and told her what had happened to Rich’ she talked on the phone to him for over fifteen minutes and told us to go and live in her house whilst we had no water. The kindness and love that they  they all showed really helped Rich, but I have to say here folks, because he listened to them. They showed that they cared about him, and showed him love and support; and for people who know people who need that please remember it is invaluable.

So on the Saturday it was Rich’s birthday and the night before we went for a drink with a friend, who came because he knew that Rich was down, and some other friends who we have met also came down to celebrate his birthday.  It was a quiet night but enjoyable.

The next day on his birthday  Jan was not allowing Rich to wallow at home. She turned up with her wonderful friend Jacques and made us get ready and go out with them into Ambrieres. We went to the Tabac (a shop in town where people can buy tobacco products, papers, cards, have a drink, and place a bet on the horses.) We had a lovely time, had a couple of drinks and Jacques (a truly lovely man who can speak many languages) showed Rich how to put a bet on (you cannot bet more than two euro fifty at any time.) It really cheered Rich up and brought him back out of the doldrums, because it reminded him that he is on an adventure. 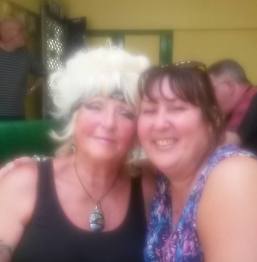 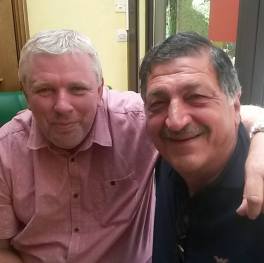 As we left the tabac to purchase a baguette for some late lunch I suddenly had one of ‘the’ moments as I looked up at the houses around us and thought “Wow! I live here!”

There are a couple of reasons for this post, one is to those who are thinking of making the move, remember it is hard, but by God it is exciting. If you accept that sometimes you will feel down, that you will struggle and feel overwhelmed, then it won’t bite you on the arse quite so bad. At the end of the day whatever crap comes your way in the words of a dear friend “it wouldn’t be an adventure without a pot hole or two!”

The other reason is a message to other people we know who are struggling with life at the moment, and I know it is so hard to see the good when you are down that black hole of despair. But look at all the good things I have put at the end of each piece of crap that came our way. There are good things! Crap happens! But what lessons have you learned from it? Don’t believe that spin doctor in your head when he tells you that everyone else has got it cracked, they haven’t the spin doctor is lying!!

Look out for some more – hope this helps some people.

2 thoughts on “A wobble, a birthday, and people who care.”