When we lived in England Rich and I were never really ones to be actively part of a community. We always felt that to be part of a community in England involved other people wanting to force their opinions, and what they wanted down our throats; it also seemed to always end in things getting snippy and everyone wanting to know everyone’s business. I do believe that some of this is an English attitude (and as always folks I am not making a sweeping statement because I don’t know everyone in England! I can only speak from my experience.) but you only have to look at the way that English people behave on some of the Facebook sites out here to see exactly what I mean. You would think that everyone out here would wish each other well, support each other, but they don’t as you well know from other posts I have made. But enough of them! The point I am making is that Rich and I were always wary of the so called “community.”

But since moving here we have changed, we have been taught by our French neighbours and so many others (yes lovely English people we have met) that you can create your own communities and you can support each other just because you want to without any agenda. Let me explain….

When we moved here we thought that our house was called Montaigu, we have since come to realise that it is our little hamlet of three houses that is in fact called Montaigu, each house, if you like, is Montaigu. We think that our house was built around 1812, because our barn is dated above it’s religious artifact, which you can see if you look closely at the pictures below, there is a small arch which contains a small statue of the Virgin Mary, to the right of the barn, she is there to protect the barn from evil and harm (which it has to as the roof has not been replaced since about 1900!!) 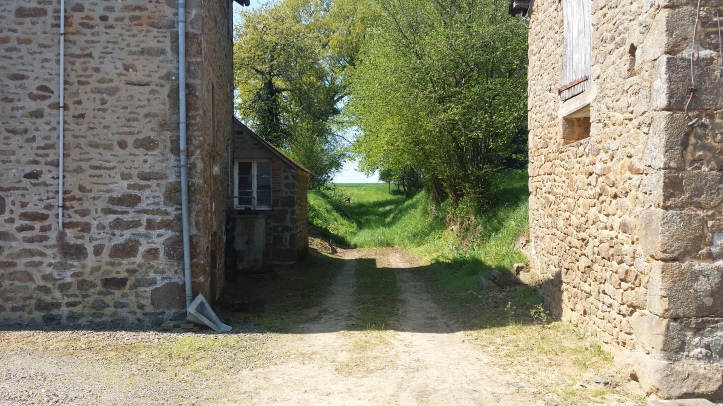 We also know that our house was in fact the farm house for all the land surrounding it at one time, and that the other two houses here were in fact other barns that were part of this house.  Others have told us that it was the part of the land and properties of the chateau that is along the road from us. but after some research this is not accurate as the chateau was not built until 1872.

However the land may well have been owned and sold as one piece of land at some point.

So that is the history, let me explain the commune. ..

Despite the fact that we live in the commune of Ambrieres Les Vallees, there are often smaller communes in each town and as our houses are outside of the town that is why the three houses are classed as a smaller commune; and our wonderful neighbour and friend Marceau (other pseudonyms are available!) is in fact the unofficial patron of our Hamlet. That is why he helps everyone including Rich and I.

It is Marceau who invited us into his house many moons ago to welcome us at Christmas time,  with his beautiful partner Nadine. It is Marceau who called the man to come and empty our cesspit and told him to use his well water to clean it out. (Posts about all are available in he archives.) It was he who has allowed us to use his water so that we have a functional house again, and it is he who yesterday turned up and gave us (yes gave) a thousand litre water tank so that we harvest our rain water. Up he came on his tractor with this bloody great tank and helped Rich carry it into our garden. It is set up and collecting water as I write. Although I have been learning French it is Marceau who always slows down and teaches me many aspects of the language, and it is friends of Marceau who have taken us to their hearts and welcome us into their home.

As we have lived here we have watched help out other neighbours Lily and Marin (no real names are used) to dig out a massive trench in their garden to erect a fence, to move their raised vegetable beds, or to clear their ditch and many other things. He really is a kind man and he cherishes the commune in which we live.

Last week when we asked him to help with the water he asked if we loved living in the commune and we said we did. We explained that we understood that he must have been worried when he realised that English people had bought the house, because would hey interact? He smiled and said that he had been but that they were happy that it had been Rich and I (how wonderful is that?!) We explained that we appreciated that they had welcomes us so much and that we watched their homes if they were not there and he explained that they did the same to us, that they have embraced us into their small community and for that we feel blessed.

The difference that we have found however is that despite him doing all this for us, and others, they do not interfere, they do not want to know your business, French people are very polite and private people. They respect others space and privacy but are there if you need them and Rich and I have come to realise that we love ‘that’ feeling of community. We would do anything for them.

We have come to realise that this adventure had spurred us on to  form other communities as well, without realising we are doing it. Remote communities that have sprung up, with friends that we have been out of touch with for years, who have been inspired by our adventure, inspired that we have had the bravery to do it, and who have supported us when times have been hard, both with words and deeds, and most importantly with no agenda; and yes, they are all English. What have Rich and I learnt? That this, too is a community, and they know that we are supporting them back, with no agenda; and the courage to do this has been given to us by French people. They truly believe in fraternity (mutual support within a group).

We have small communities with other people we have met here, not least my wonderful friend Jan, and my kind and lovely friend Louise. I know that they are there if I need them and they know that I am there if they need me.

We have one other very special friend who wishes to remain nameless, who has helped us immensely and I know loves us so.

But let me not forget one other community that has become an important part of my life and it is this community- the community that is all over the world that read this blog. For that I am truly grateful and please do not be shy, I would love to hear your feedback.

So for those, who I know read this because they are thinking about the adventure, consider this ….. you get so much more than you realised when you take that chance including a change of thinking!

Look out for the next post – and welcome to the newbies, I note you have been reading the archives, please, read away and share with others.