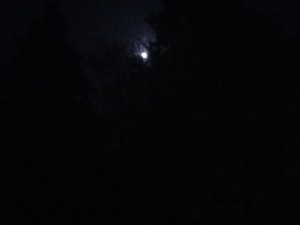 I may have said it before but I love my surroundings, love where I live.

As I sit here in a fleece, body warmer and I think (given the temperature, and the fact that old stone houses love to absorb the cold ) soon to be added scarf and finger-less gloves to my ensemble, I look out at the farmer tilling the field outside, and the cacophony of colour from the fallen leaves, and I am, still, grateful.

But despite my love for it there have been times in the last week when the surrounding countryside has looked really really creepy.  What with autumn, and autumn mists, the full moon and Halloween it has been enough to spook anyone – not least my husband.

So the other night he was letting the dogs out and I caught him peering out of the door (picture the scene he is six one and he was in his shorts and pyjama top  and his old mans’s dressing gown, as he is peeking around the edge of the curtain as if he is afraid something will be looking back in on him.) “It is really spooky out there tonight” he said “Come and look.”

When I looked out it did look like something from a Stephen King novel. The full moon was shining and the mist was rolling in off the  hills and fields; but the weird thing was it  stopped just on the edge of our garden; lurking on the peripheries of the garden fence – as if waiting to be invited in. The full moon was shining between the trees and you felt as if you were being watched.

I love to experience it all, and said “I am going out out there.” At which point my tall husband with the fifty inch chest said “Oh yeah, I will come with you.” He said it as if he was coming out to keep me safe when in fact he was going out in the garden because I was going to be with him!!

But it was weird, completely still the fog not moving, as if it was holding it’s breadth. The moon had a shroud of mist around it and I had to take a photo – just a shame that it did not come out as well as I hoped! I wanted to show you the mist but it just came out as a blob of black!! It was chilly and silent and still.

Despite all the hard things about living in France in the late autumn and winter I still love it, love the rawness of nature. Love understanding that ‘Do you know what? ‘We are not as important as we think we are!

So after my last post I was spurred on and we are now venturing out into something new. We are both practical and I am arty and we are going to start to design and sell wooden stars, moons, garlands, hearts we have so many ideas! We are busy getting them started and watch out for future posts – inspired by nature we are at last moving forward.

Just one other thing – a massive, huge thank you to you all. The support after my last post was overwhelming and repaired my faith in mankind after becoming so disillusioned.

One of my all time sayings is that “Life will show you the way.” And it has, and it will.

Back again on Thursday – I promised I will blog every other day.