Memories, the best gift of all……

So they came (for those new to my blog you may want to read my last post) Karen, our dear friend, and now a member of our family, and Tom our darling son who we have not seen for three years.

Tom was his typical narcolepsy boy (as we used to call him as he always fell on asleep when in transit on anything that moved including the back of his Dad’s motorbike once!!) So he said to Karen “put the heating on full and it will make the puppy go to sleep, guess what?

So Karen entertained herself by shouting “Tom! Tolls” every time they came up to a toll and he had to pay, she had a great time what with that and talking to herself!

I was so excited to see them and when we met them on the bridge in Ambrieres, with the youngest member of the family Dylan the Welshie pup…

we cried. We cried to see each other again, we cried for time lost. Then we went to the pub!!! (We are English after all!!)

As always the French people of out town welcomed us, welcomed Tom wished him bonne anniversaire for his birthday the next day, and made a fuss of the three welshies in their midst – not least the cutie above.

Then we were off home, where frivolity, drinking and eating took place (after unloading Karen’s Citroen with all the goodies they had brought over from England.)

On Christmas Eve it was Tom’s birthday, so we took him off to a little town near us to look at the Christmas lights. Now France is a Catholic country so little is open on a Sunday but we thought that given some of the bars in our town were open the bar in Ceuce would also be open. But no!! The Boulangerie was open (as always in France bread has to be available it is the law!) but no bars. So we decided to look at the lights that the won had made an effort to put up.

Now I love living here, but sometimes things can be weird like the mannequins that were put in in the town (unsure what they had to do with Christmas!) and also all the farm machinery and implements that were displayed with lights around them, mmmmmmmm…… Not sure about those either. Tom thought they were hilarious and weird, and we all thought that they were a little creepy especially the mechanical ones that stopped what they were doing and turned and looked at you. They looked as if some in-breeding had taken place as all the mannequins looked the same apart from the men had beards and the women had breasts!!!

I walked around the displays with the words “worst birthday ever…. where did your mum take you for your birthday Tom? To a weird town with mannequins that stared at you and you couldn’t get a drink!!” ringing in my ears. It became one of the catchphrase of the season “worst birthday ever!” And we think we might make it a tradition if he comes next year!

On Christmas day we were invited to our French friend’s and neighbours house for an aperitif at eleven. As always we were made so welcome, and it made me realise how much French I can speak now as I was the translator for all. I think it made Tom feel reassured about our life out here, he could see that they loved us, especially when they hugged me when I became tearful when I tried to thank them for all their help and support. They really are wonderful lovely people and we are blessed.

After consuming three bottles of champagne and cheese aperitif’s we made our way back home to have the biggest dinner in the world (not until 7pm) and open our presents.

It was a different Christmas to any before, Rich and I did not buy each other gifts, we could not afford it and also realised that it did not matter. We have each other, and after all our hard work over the years we cherish what we have.

So we had small gifts for Karen and Tom and they had small gifts for us. Loved ones from England had sent us thoughtful presents, treats for the cats (so I won’t have to buy them) Baileys, Shortbreads, warm socks, and not least a beautiful opulent hamper from Fortnum and Mason’s. It was the kindness and thought that had gone into those presents that meant so much.

But the best gift I received was when my son (who did not want us to move here, and loved our old house by the sea, as I did) stood in our living room and said “It’s good to be home.” 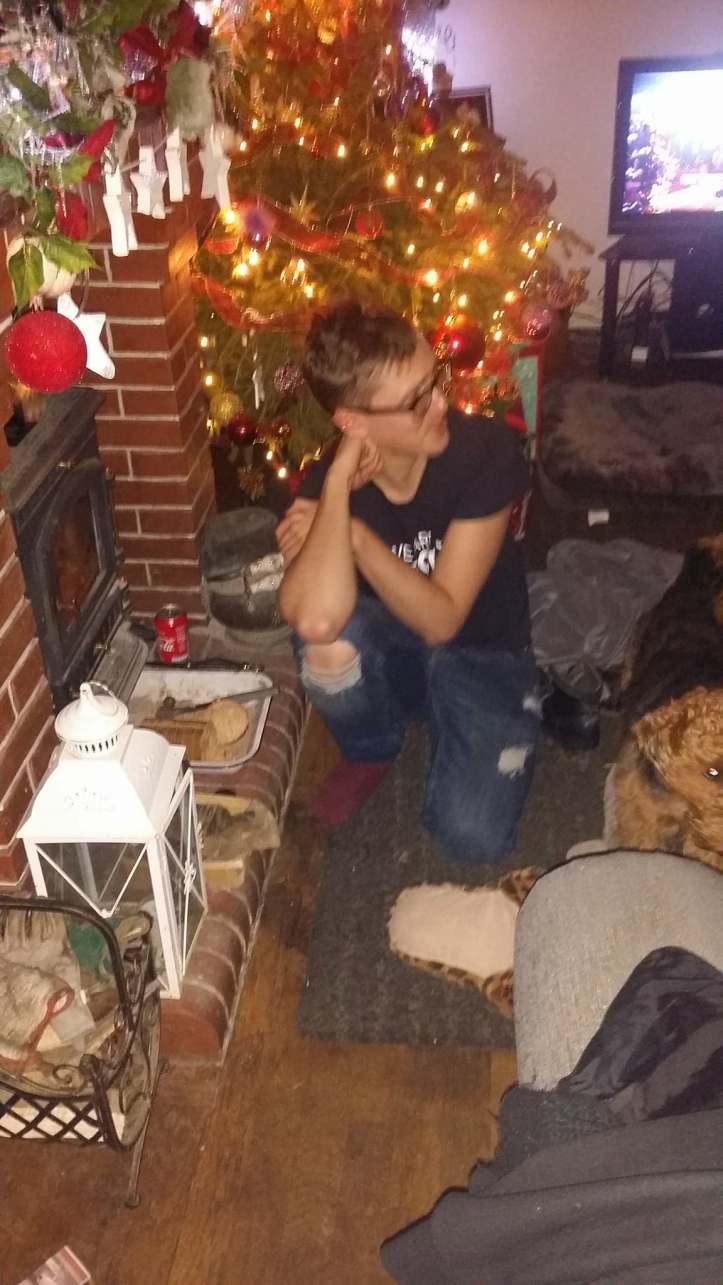 The time flew too fast with much eating, drinking, giving Tom dirty looks for taking photos of us eating…… 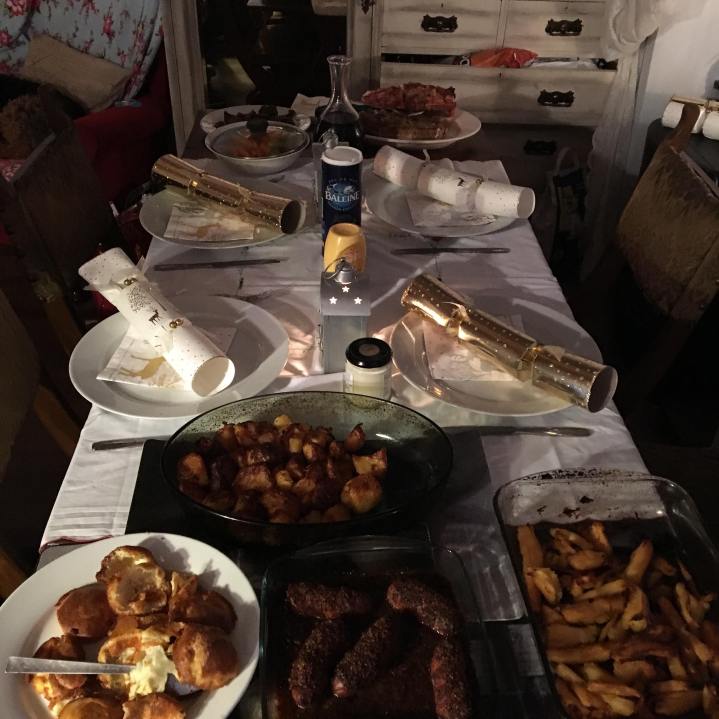 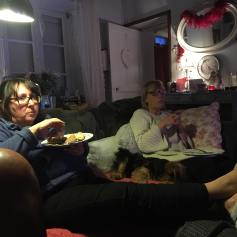 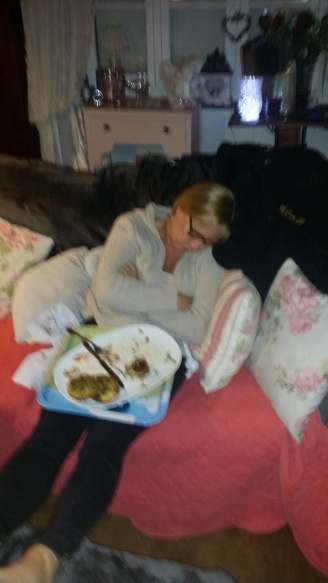 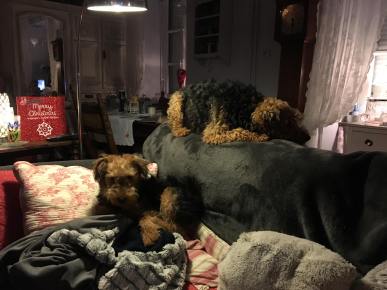 That puppy was pooped a lot of the time 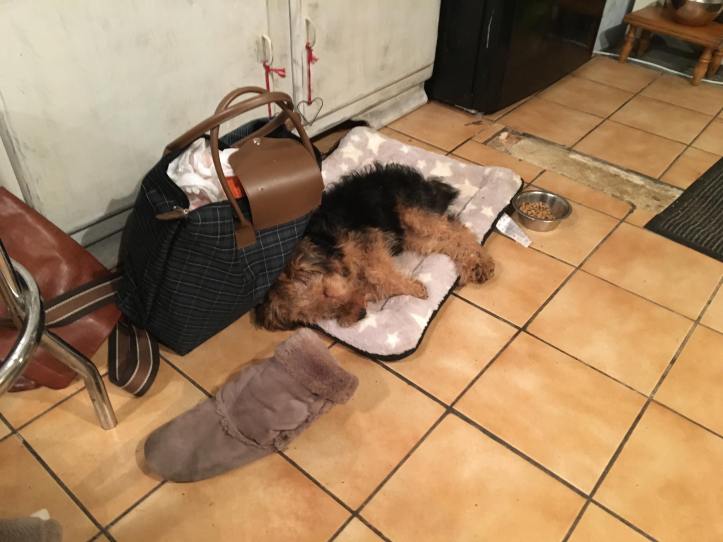 The little dogs had such fun, forming a pack very quickly with Harley being alpha, Wiglet being mummy and the baby being told!! 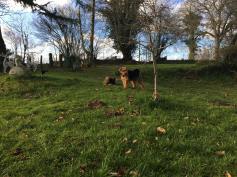 The last day came round too fast, we went to Mayenne,our nearest large town, and Tom finally got that birthday drink in a bar (well he had a coffee, we had a drink!) On the last evening we all posed for memories (although they will always be with us) 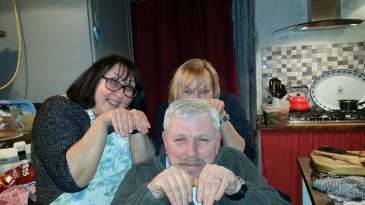 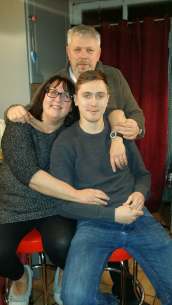 and Tom told me how he loved the house, how it felt warm and cosy despite the mold on the walls and there only being an open fire. I knew why, because our house is full of love, and nothing can buy that.

When the day came for them to leave, Tom off to another adventure in Italy visiting his girlfriend for New Year, Karen and Dilly Dils back to England; I busied myself making them sandwiches for the journey, and we all cried as Karen and the pup left. Then came the time to say farewell to Tom and he hugged me hard and told me how much he missed me, but he knows now that home is still waiting for him, always. It is just in another place.

I sobbed as they went, Rich taking him to Laval for the train and the house seemed empty, as the ghost of Christmas present finally gave his last. I cried my way through the washing up and wiping down, and the dogs sulked on the chairs.

I hope you had a wonderful Christmas also, this one made us realise that Christmas should never be about the presents but about the presence of loved ones, and the memories that are left are all the gifts you need.

Happy New Year, lets hope it holds all you desire, even if you don’t know it yet.

Visit my Etsy shop petiteFrenchfancies you may find something special