And so…… After leaving all of our mad English friends to party and be merry, we made our way home to ensconce the Welshies, and get changed for pour la deuxième partie de notre journée de fête (part two of our day of partying!)

Off I tottered in my heels (all of 1.5 inches that only lasted half an hour!) and my maxi dress. Our lovely neighbour from opposite had kindly offered to lead us to our destination. Off he shot like a bat out of hell, as is the norm for France, with us frantically trying to keep up in our Smart car!! We arrived in a tiny small village to what looked like the old schoolhouse. It was 8pm at the time of arrival and our lovely friends and neigbours Mark and Nadia were there to greet us.

As we entered the hall there were about twenty people there and we had to go around them all (including children) kiss them and say bonjour, or bonsoir (good evening) depending on who wanted to be specific; Rich and I duly kissed all the women, children, teenagers and shook all hands with all the men. Then we were offered orange juice and canapes, and we stood and waited for others to arrive. As each family arrived they then went around all the people there and kissed them, or shook hands, and said bonjour. Seventy people later, about fifteen glassed of orange juice and copious amounts of canapes we sat down, at 10.20pm for food…

The cold buffet was beautiful, with roast beef cut paper thin, ham, suckling pigs, various salads, mayonnaise that was so thick it looked like custard (and tasted magnificent). There were fish dishes, of salmon, and egg dishes and bread with wine constantly being replenished at the table. When Rich joined the smokers they welcomed him with one young man telling him in French how he adored the English and England. 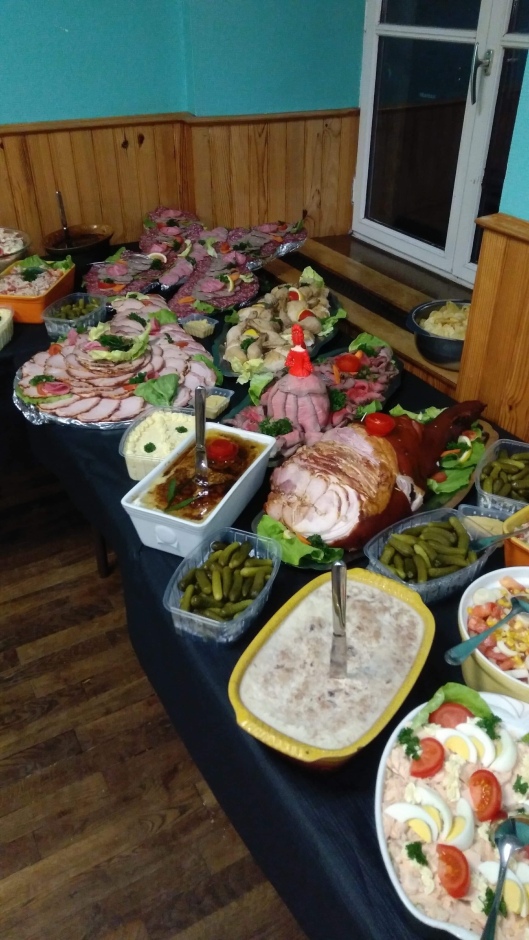 We were the only English people there, and we were made to feel welcome, although were a bit of an anomaly to some (especially my cleavage it appeared!) But as the night wore on and the wine started to flow the barriers came down for those that were wary of us and we were welcomed by all.

Our wonderful French friends Nadia and Marc have such a joie de vie, it is wonderful to see. Our other friends ‘Cheeky’ (Michel) and Martigne as always welcomed us into the fold and it was wonderful to watch Rich with Michel, Rich cannot speak a lot of French, Michel cannot speak any English but somehow they just communicate – I think it is because they are both so naughty! 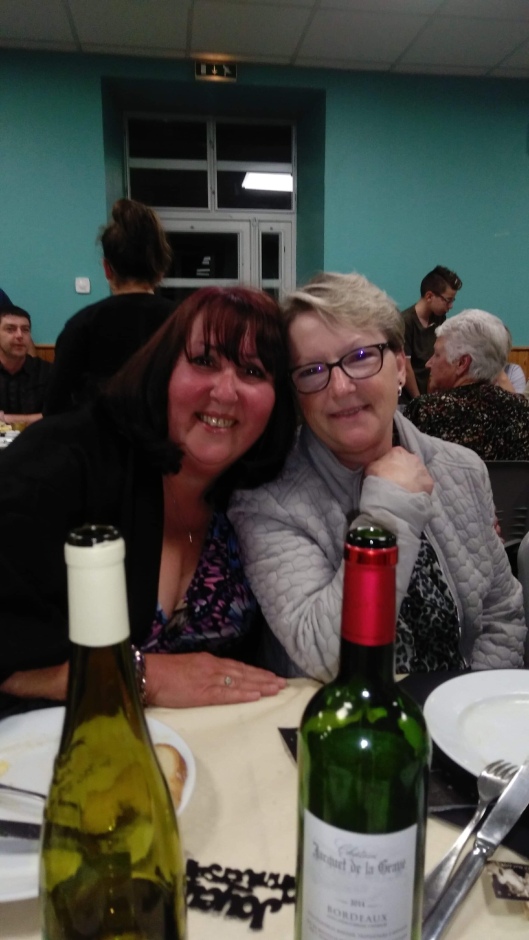 I was so full, but oh no, then came the cheeses – I could not eat them, but Rich did not let the side down, as it is seen as rude if you do not partake. There was every cheese imaginable cow cheese, sheeps cheese, goats cheese, hard cheese, soft cheese, blue cheese, and not a cracker in site (the French think that crackers are weird!). Following on from the cheese was desert, which was partly a slice of the huge birthday cake that was paraded down the centre of the hall, with sparklers in place! 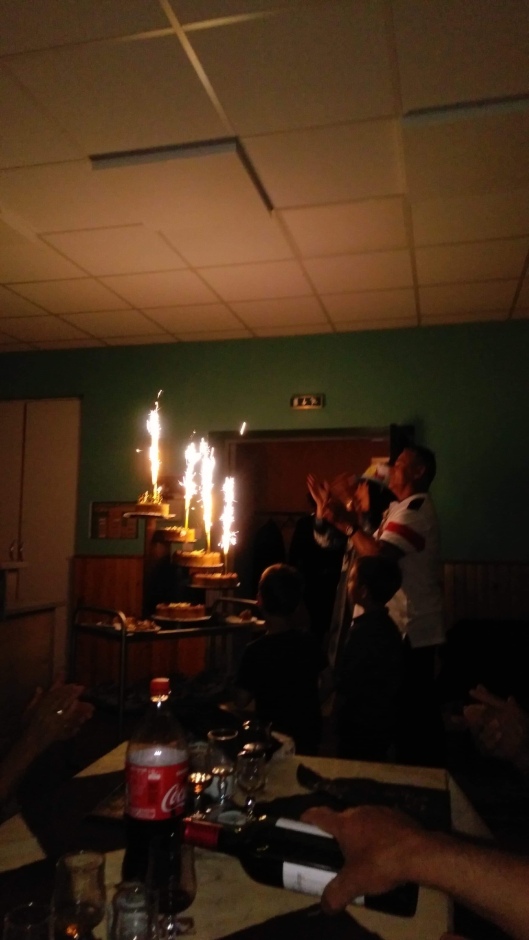 Added to the gateau was an apple slice and Choux bun.  Then out came the whisky, at which point Martigne suggested that they drive us home and we collect our car the next day – how lovely of them.

After that a game! A bit like pass the parcel but it was a bowl with slips of paper in; you had to pass it quickly down the table and when the music stopped if you had the bowl you had to take a slip of paper that would give instructions for something you would have to do with Marc and Nadia next year – Rich has to partake in a vigorous activity with them in March. God only knows what that will be. There is no forgetting it is all logged down – so good luck Rich!!! I was lucky it did not stop with me!

With my flip flops safely ensconced on my feet, and it now being one o-clock in the morning the disco commenced.  I shocked some of the French women of my age by dancing like the teenagers – but hey ho Nadia and I are alike in our ways, young at heart and not letting age dictate to us.

After coffee and at three o clock in the morning, we were dropped off home by our dear French friends – after kissing the remaining sixty two people and wishing them bonne nuit (goodnight) of course! How they all laughed when we told them that we had left the lights on for the dogs!!!

But it did not end there……. At 1pm the next day they sent someone to collect us and go back for round two!! I kid you not. I was still in my pyjamas, and got ready in fifteen minutes. But was really lovely was that they cheered when we arrived, they are so lovely.

At about 4 we made our excuses and left as Rich had to travel the next day.

But what was wonderful was when Rich looked at me across the table on Saturday night, and said “This is the adventure, being embraced and learning about a new culture. I am so glad we did this, we have good friends, English and French, a select few, but all worth their weight in gold.”

We are blessed, and I am knackered!!!