They do say that you are never more than six feet away from a rat no matter where you are in the world. How accurate this is I don’t know, but I do know that it would have been naive of us not to think that rats may visit our garden, especially because we had chickens.

On the first night we moved into the house Harley was going mad at something in the garden. The house had not been lived in for three years, and the garden had been occupied by three goats (hence the name for the goat’s shed) and anything else that chose to live here! We only had Harley at that time, we moved here in August and Wiglet, aka the serial killer, did not come to live with us until the October. Had she been here then what Rich discovered would not have lived to see another day, but as it was only Harley the huge rat that Rich found when he went out to get Harley by torchlight, managed to get away. Although we did not see a sight of it after that, the following year Wiglet came bouncing down the garden so happy with a huge, dead rat in her mouth. “Thanks for that!” I said!

Over the years we did not see any more rats because our dogs are hunters and, especially when the serial killer moved in, the rats were deterred. But where there are chickens there are normally rats and after putting too many left overs in their enclosure in April we believe that a whole family moved in. 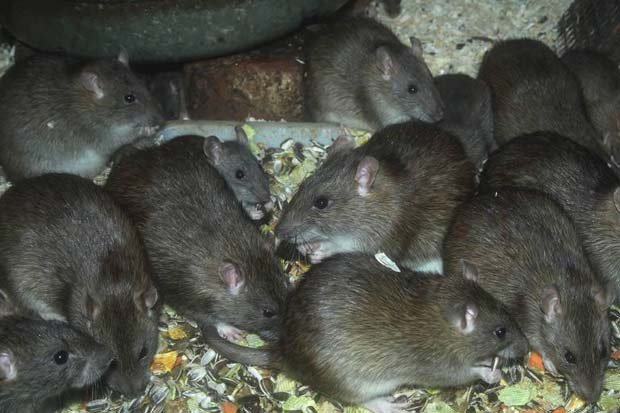 We thought that we might have a problem after the chickens appeared to have stopped laying, and it appears that rats will steal the eggs and attack the chickens. They knew that they were safe from Wiglet (aka serial killer) because she could not get in the enclosure, although at times she would go mad trying to get in there, and she would also spend hours staring at something hiding in the twigs from the trees we had cut down, with her little tail wagging as if to say “I am so pleased to see you, come and play little rat!” She has dug holes all over our garden trying to flush them out and we planned, after we moved the chickens of course, to let her into the old Chicken Hilton and have a field day.

Over the summer Rich had seen the rats, I never had because I normally have the dogs in tow, but he said that they were getting more and more blase, and would  come out into the chicken enclosure in daylight. One day he counted seven going back into the Hilton tail to tail because (you guessed it!) Wiglet had come out to play. So we hatched our plan: we were going to put the chickens somewhere safe and let Wiglet have a day in the henhouse catching rats. For her it would be like a day at Disney!

I told you she is the most beautiful loving, vulnerable little dog but her mother and father were hunting stock and she is a born and bred hunter!

But, as is life’s way  nature beat us to it…

As I lay in bed one night with Rich snoring beside me, I could hear the hooting of a Tawny owl (probably the one that loves to sit in our cherry tree and look at us.); I have explained in previous blogs that one of the beauties of living out here is the owls that you just see every day (you may want to visit my post: what is is about you and owls!) There are Tawny owls, Barn owls and the cute little Pygmy owls that come out in the day..

In addition I could also hear a lot of screeching! Husband will sleep through anything but I lay there knowing that the rats were getting their come-uppance! Our cats had also been very interested in the chicken enclosure and I imagined them sitting on the stumps of the trees with a glass of wine watching the entertainement!

Over the next few nights as we lay in bed we could hear Barn owls, and their babies and a lot of screeching, and squealing, coming from the garden and I knew that the rats had become too blasé, and the owls had spread the word and were now having a a feast.

Gradually we saw less and less of the rats, any food that the chickens had not eaten remained uneaten (although we have drastically reduced the scraps that they have.) Over the past few weeks we have seen no rats at all, although their warren of holes are still evident as Wiglet digs them up! One day Harley did spend an age staring into a hole wagging his tail in greeting, but it was a false greeting because that rat would not have lived to see another day.

So nature took over, the owls killed the rats, as they were meant to do, and I lay in bed listening to the life that goes on outside when you live in rural France.

I know that as the trees that we chopped down gradually get cut into logs, and I turn the twigs into kindling, the rats will have nowhere to hide, and if there are any about trust me Wiglet will have her day!

There is no going back to the Chicken Hilton for them because the dogs are now in there all the time. It may only be a matter of time before I am back in a scene from ‘Whatever happened to Baby Jane’ and Wiglet presents me with another dead rat. Good! 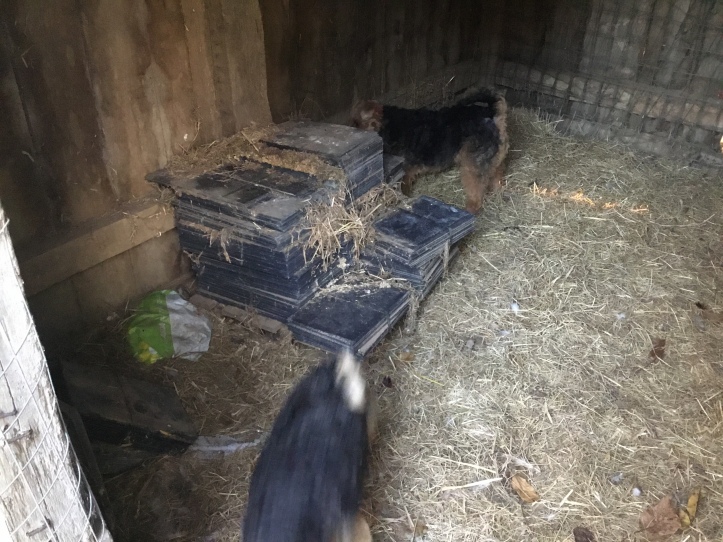 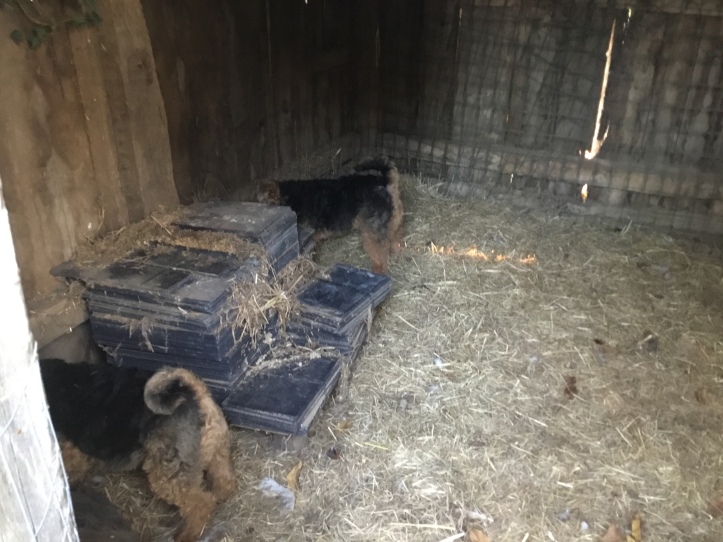 In addition Rich found a cache of hidden chicken eggs under the hay in the old suite of the Chicken Hilton that was once occupied by the chickens; the poor chicken was laying and was hiding them from the dreaded rats! The fact that they had not been eaten is also evidence that the rats have been scared off – straight into the jaws of Wiglet!

It’s all part of the adventure folks! 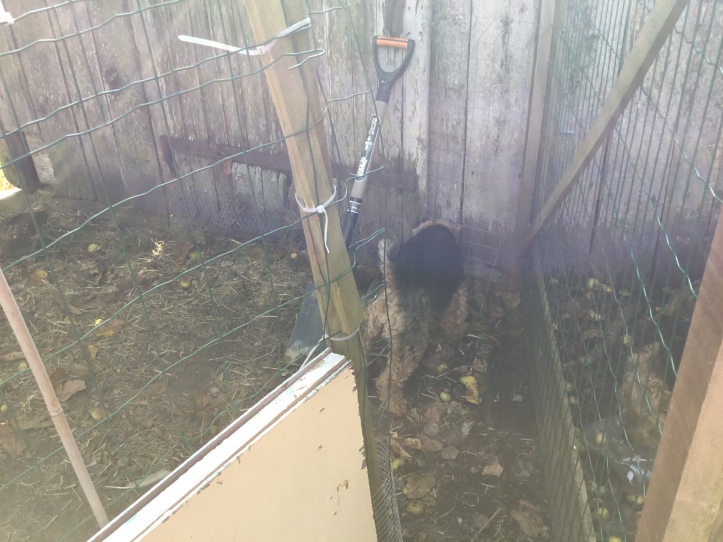 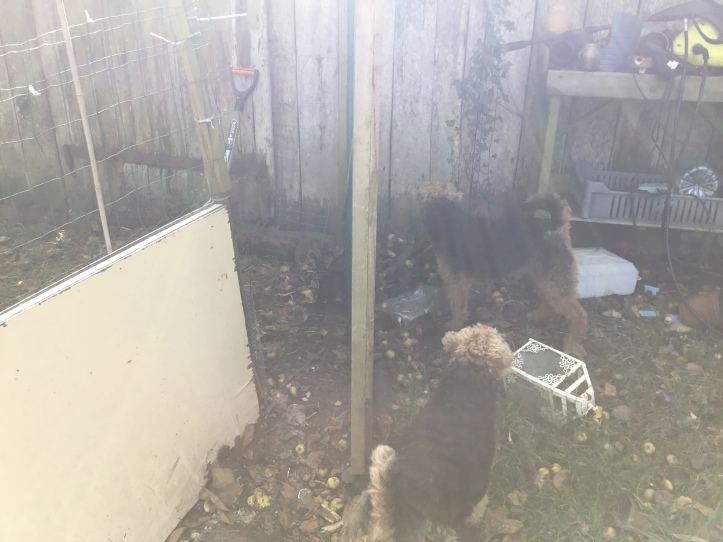 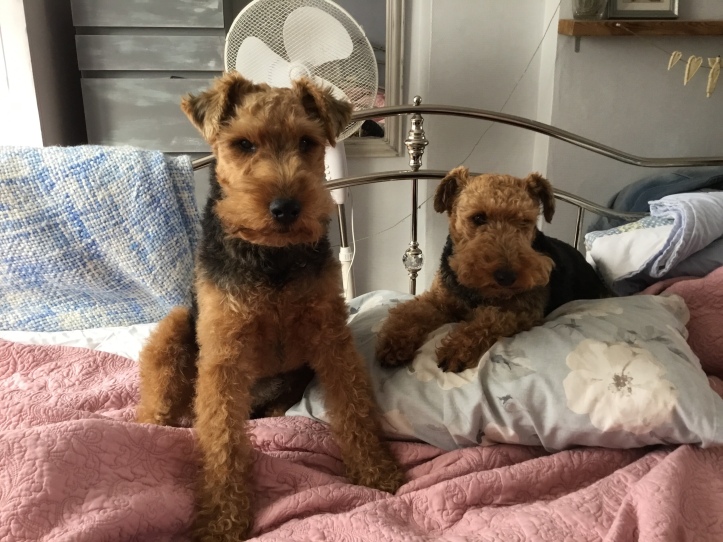