And then life runs away with you….. 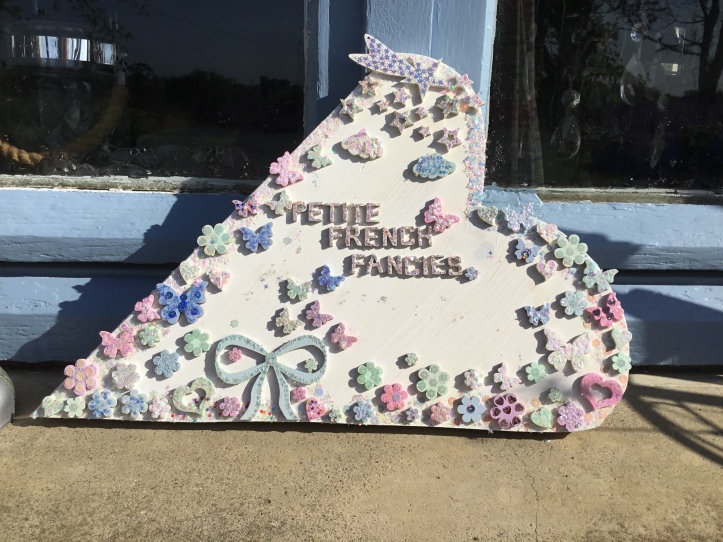 I cannot believe that it has been two weeks since I blogged! Life has just seemed to take over!

My dear friend took all of my stock of ‘handmade with love in our barn in France’ wooden hearts, moons and much more, back to England to promote at an artisan market. I spent two days painting and embellishing this promotional board for her to use, and then sod’s law stepped in and the courier company did not deliver it in time!

But such is life and the stall looked stunning anyway and has generated a lot of visits to our Etsy shop petiteFrenchfancies.We are blessed to have such food friends who help us, and I always count my blessings. 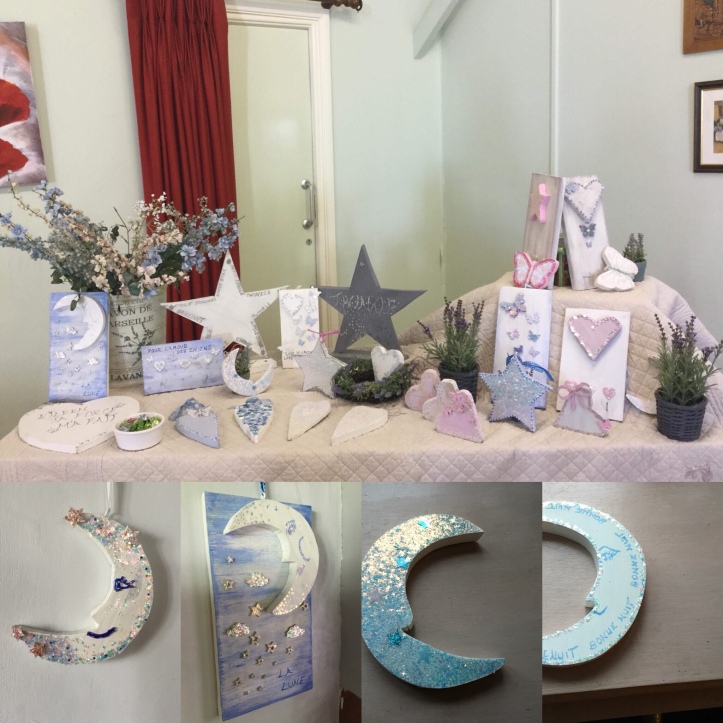 As part of promoting a shop, and raising my media profile, because I WILL get that book published, I have twitter, Instagram, and PinInterest accounts, and spend quite a bit of time posting to these sites, but they do work and so it must be done. It was no surprise to me that the stars of the show at the Artisan Market were the moons because I have a moon board on PinInterest that has just gone berserk averaging up to thirty pins a day!

This has inspired me to develop that particular part of the range and branch out into moons and hares, and I love it…

Also Spring has kicked in and the clematis, and hydrangea needed feeding and rearranging quickly, and our pots needed to be fed and prepped for the summer. I plan to have a blaze of blory in my pots this year.

Adding to that we are still frantically trying to clear our garden of the trees that were felled in February, just so we can mow our grass and stop any ticks getting to our much loved animals, especially these two… 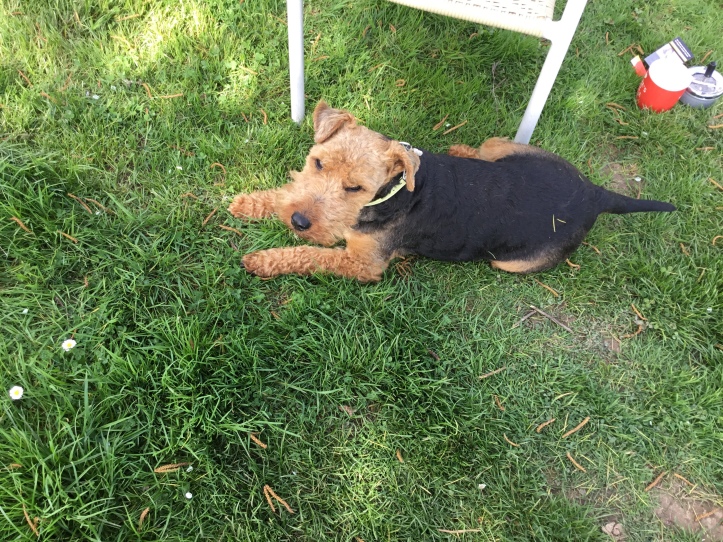 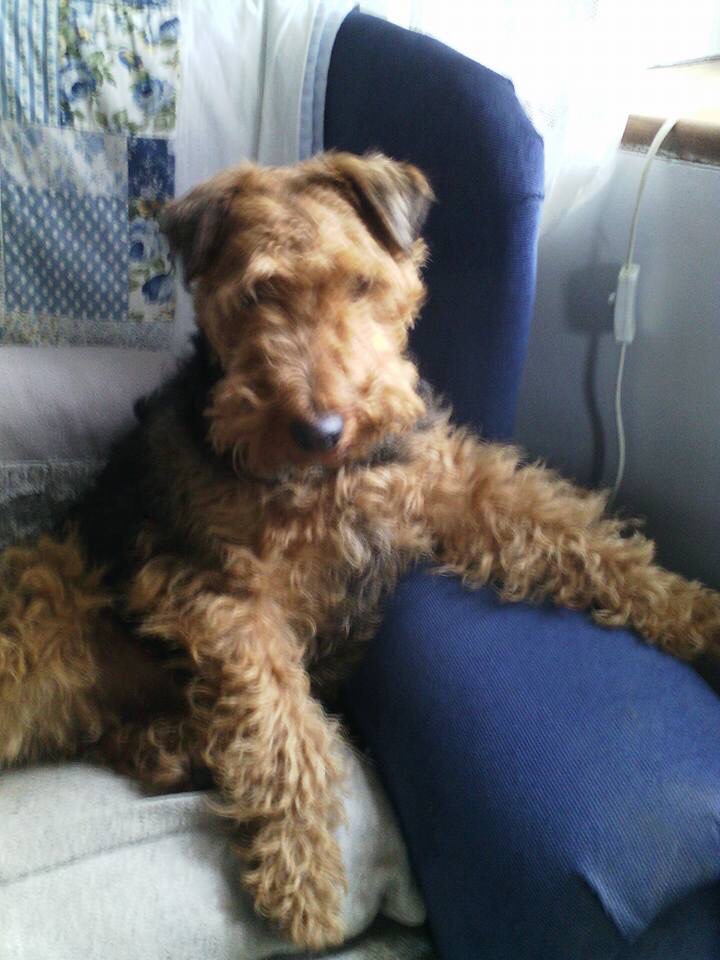 The grass has got so long around the tree branches that they are literally becoming embedded and that will have to be our focus for the next week in between working and the two bank holidays that are in France!

So bank holidays mean vide grenier’s where the French bring out all their old treasures,and often all their old merde! And sell them. This is the time I am in my element, searching for pretty little French things to stock my shop, only last week I found these beautiful and rare finds….. 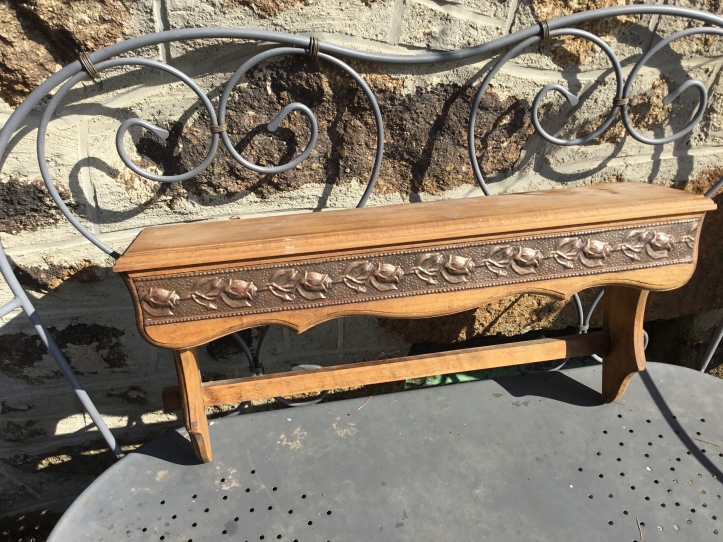 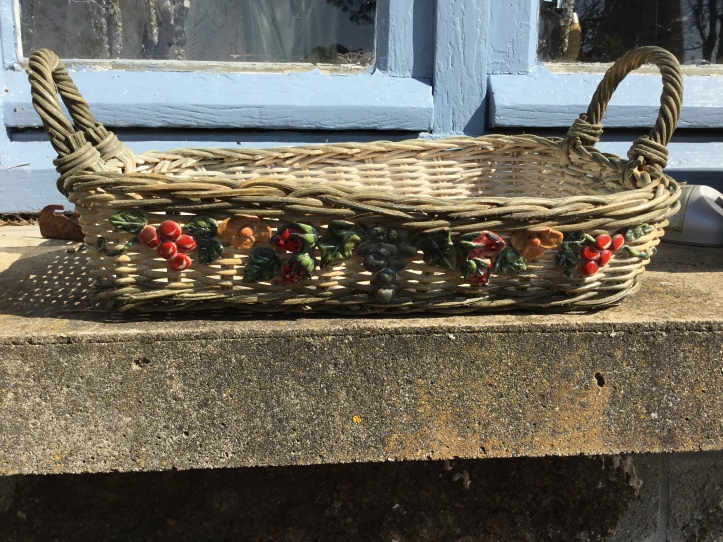 I want to keep the shelf, vintage from the 1940’s but hubby has put his foot down and said it has to go into the shop. He is right of course, we have been without a kitchen roof for three years, so we have to focus now that life has sent good people our way.

But now they have been added to my long list of things to do, as they have to be put onto the shop, with photos to be taken, and settings to be made!

Sadly we also lost two of the girlies over the past two weeks, despite adding calcium to their diet, and rubbing their bellies because we thought they were egg bound they passed away. We could not kill them or eat them and we have had to have a funeral pyre for them so we raised a glass one evening this week to say goodbye as we sat by the fire bin they were in. Now Claude only has three girls in his life, where this time last year he had six.

Like I always say, the only constant in life is change….

So speaking of change Tilly did not return. Her bed still lies empty, and there is a big hole in our hearts.

Last weekend a strange thing happened, TIlly had a small toy bird, that when touched, or tossed in the air would tweet, it sounded just like a bird. It was up on her bed, and I had forgotten about it, but last Sunday, on a wet afternoon, it started to tweet, as if something was playing with it. For two hours it drove Wiglet the Welsh to distraction; perhaps it was Tilly’s revenge for all the times she had chased her! And then it stopped. There was a strong sense that our beautiful little cat was with us, in spirit. On the Monday it started again, and I looked up at the bed, with tears in my eyes, and said how much I loved her, and thanked her for coming to say goodbye. The bird stopped tweeting, and for me, she was gone. But not for Rich, he still hoped; and so on Monday of this week, as he was in the kitchen making the tea, I heard him say “Oh my God!” He came running in to get his shoes on, saying Tilly was on the windowsill crying to come in. I flew outside, frantically cslling her, but she was not there. Rich swore he had seen her, I believe he had, she had come to say goodbye, to tell him to let her go.

So yesterday as I was working on PinInterest this picture came up on my feed, it was as if to say Tilly is with Snowy our Westie Dude, and he is looking after her 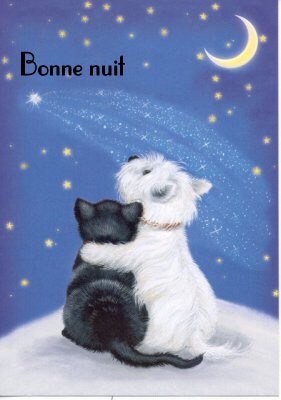 i have to believe what I tell others, who lose their beloved pets, if Tilly could tell me this is what she would say….

And yes I do have tears in my eyes.

Have a lovely Sunday everyone whatever time it is for you in your timezone, treasure every moment…