It’s been a whirlwind few days after our son Tom surprised us on Saturday. We have tried to cram so much into three days, because he had already committed to going to my sisters house for Christmas day, and it was only right that he fulfilled that commitment.

We decided to have two Christmas’s one with them and one on the day.

On the Saturday we went out to visit someone who has been nothing but kind to us. She is alone and for me Christmas is about understanding and giving something other than gifts: time. We had already arranged to visit her, and Tom and Chris (the boys) volunteered to come with us. Trundling into the back of RD’s van (totally illegal!) and moaning about their arses hurting them. 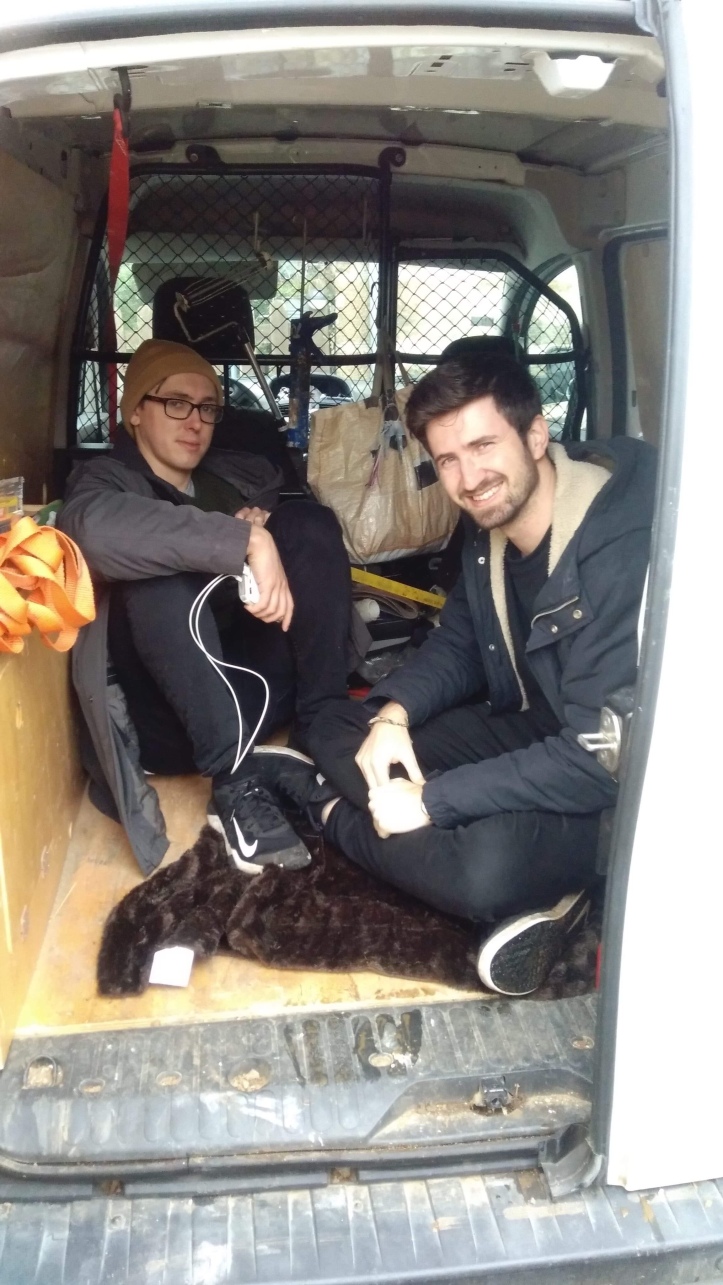 When we arrived these two young men were so polite and kind, even sorting out some technical stuff for her on her computer. I was so proud of them both: another gift.

We then took a detour to the medieval city of Domfront, with its beautiful lights, and had a few drinks in a quintessential French tabac. The weather was awful, but it couldn’t damp our spirits. 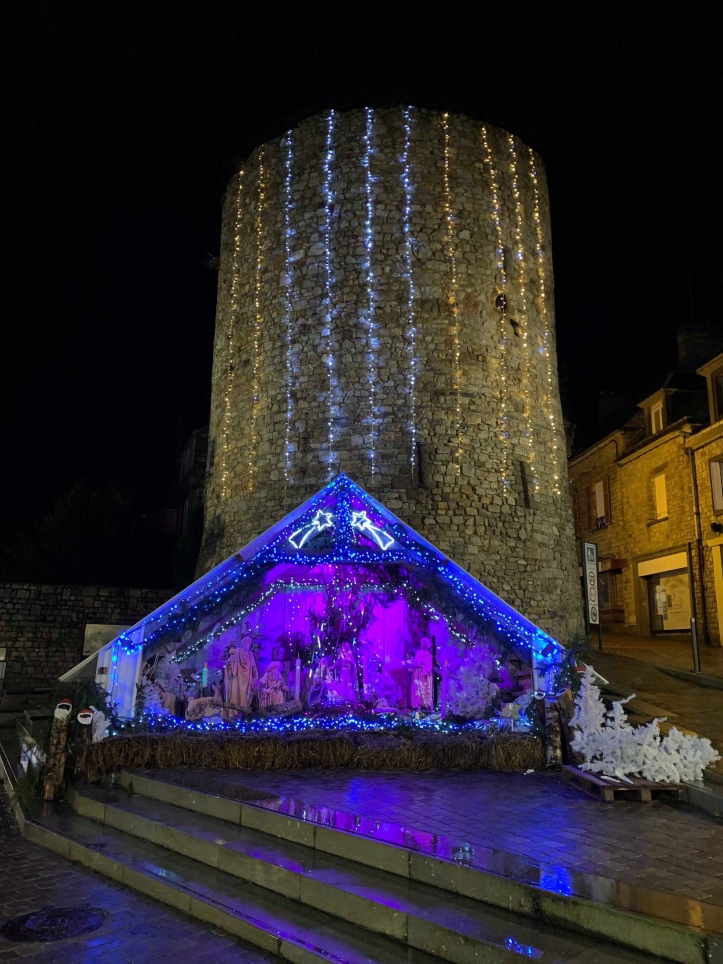 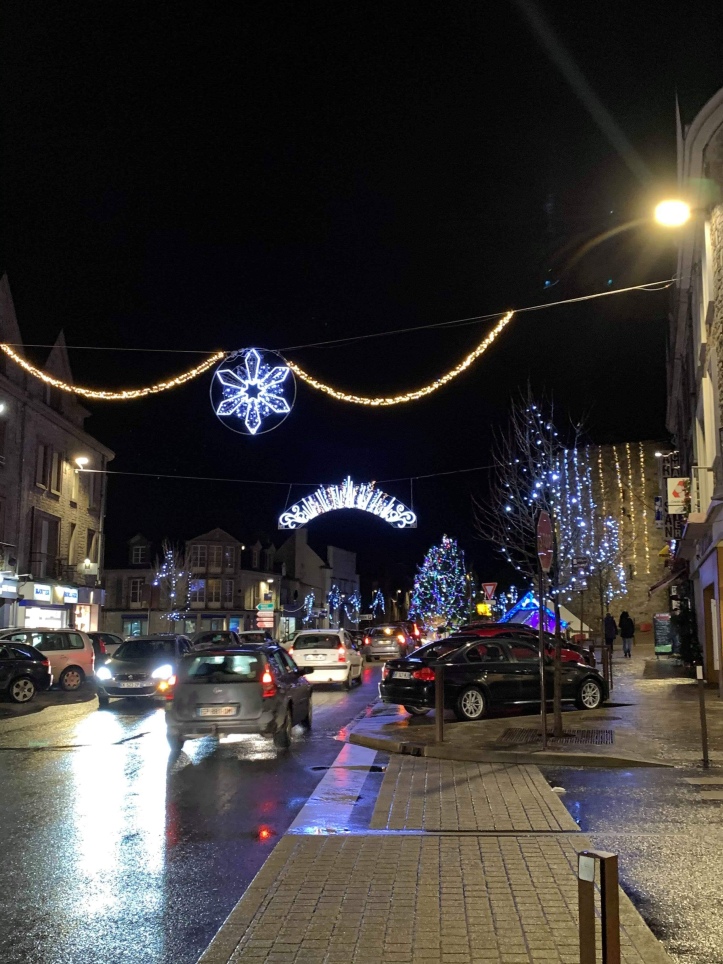 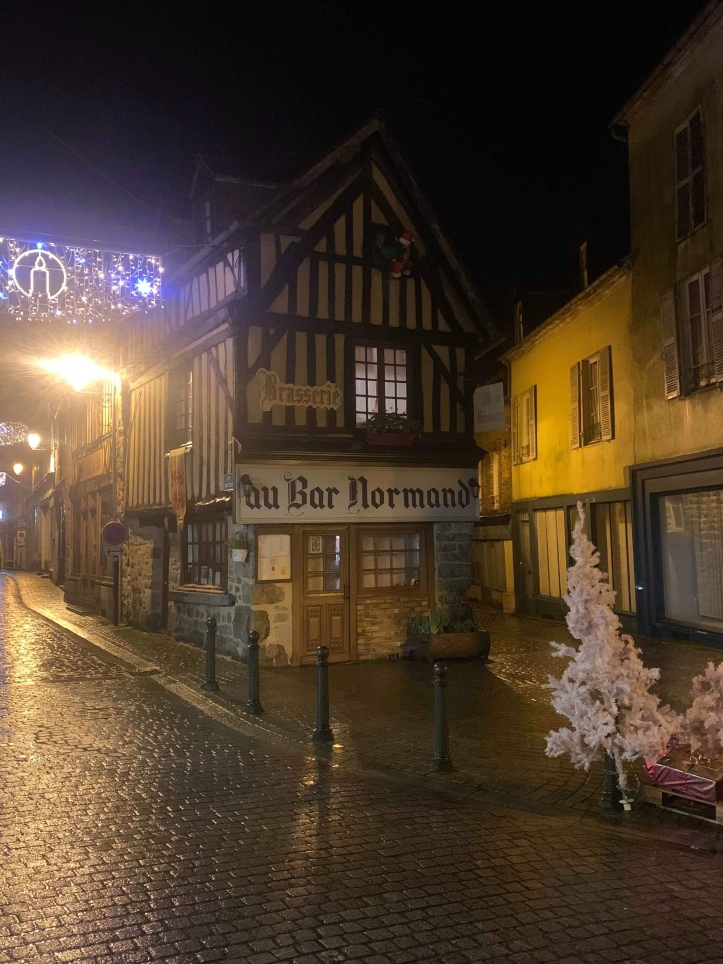 It’s strange how we can all revert back to being ‘mum and dad’ with our kids. Tom has a good job, lives in Newcastle, contacts me when he wants and needs to, and I pretty much leave him to his own devices. He is an adult I am not an ‘over motherer’. I had him to live his life. But on Saturday they went out late and drove to a town near us to see if any bars were open. We didn’t go, we would have ‘cramped their style’, and also we were knackered! But they said they were coming back for chicken burgers and we waited up for them, knowing the bars in France do not stay open late. But when they hadn’t come back by 1am we started to worry, wtf! I looked at RD and we both started to laugh, because he felt the same. Our son looks after himself in Newcastle all the time, and we never worry, yet as soon as he comes over to us we become worried parents. I gave in and rang him. A very pissed Tom rang me back from a house in Lassay, they had been invited by some French girls they had met in a bar (nothing changes!) Tom thought it was hilarious that his mum was ringing him. I cooked the chicken burgers and left them out for them. When we got up the next morning they had obviously cooked chips, because they were everywhere. Nothing changes!

We visited Mayenne on the Sunday, where Christmas activities were taking place, and had mulled wine and hot chocolate.

When we got home we had an alternative Christmas dinner, of roast lamb and all the trimmings. 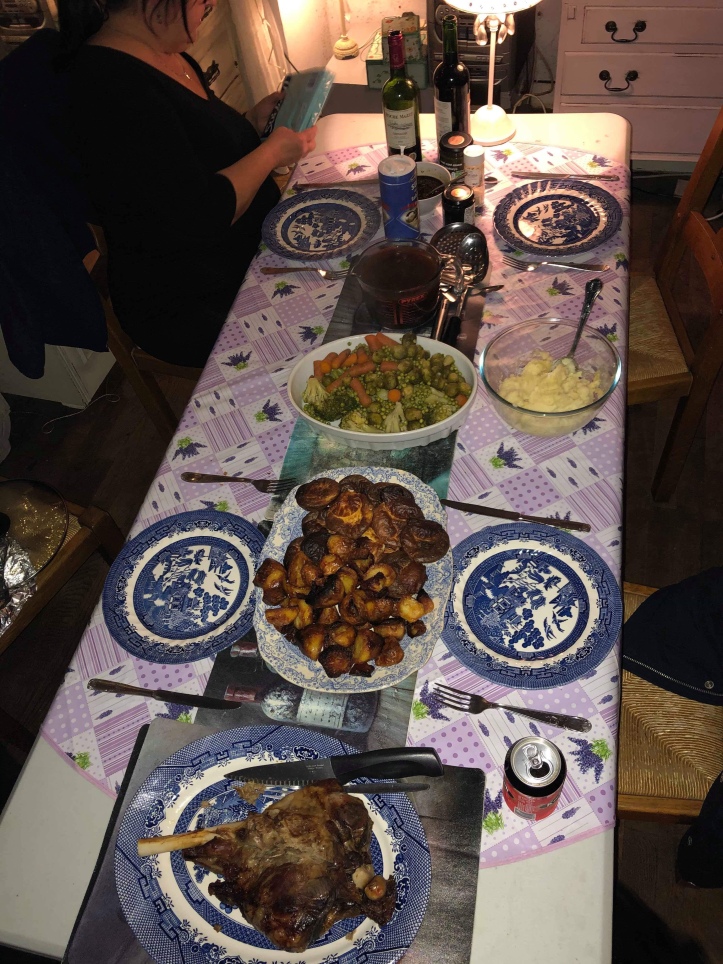 Followed by an evening in front of the fire and TV. Bless Chris he had driven for over ten hours to get Tom to us, so that was him!

On Monday we went shopping, I cannot begin to tell you the amount of wine and cheese they bought! We played Monopoly, and ate spaghetti Bolognaise very very late.

It was a joy to see RD with them. I realised just how much he misses the banter of being around men. They always used to love tormenting RD, but they never won, he always got them in the end, and nothing changes. I love this video, it sums these few days up.

It was all going too fast, and Tuesday came too quickly. Very early in the morning, in the dark before dawn, we hugged them goodbye. Am I crying now? Of course I am.

So it’s Christmas day, and we are still in bed, even the Welshies are worn out from the whirlwind of fun. 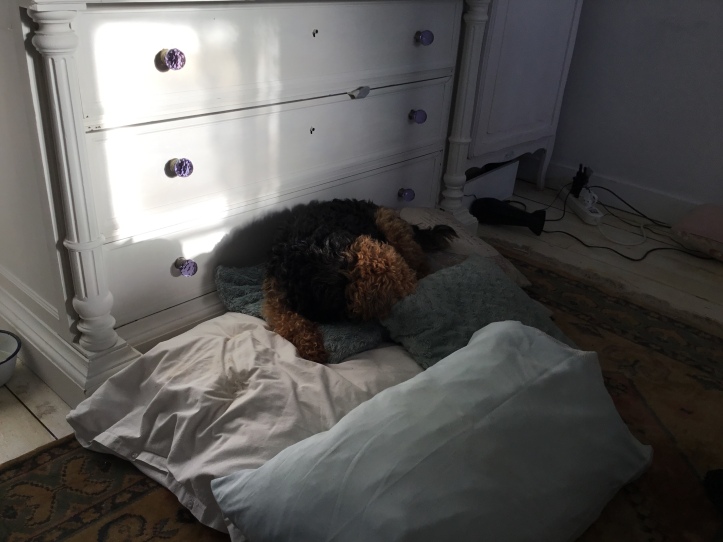 We will have our traditional turkey dinner, and have a very quiet day. But we will have the greatest gift of all: memories.

Have a mellow Christmas folks. 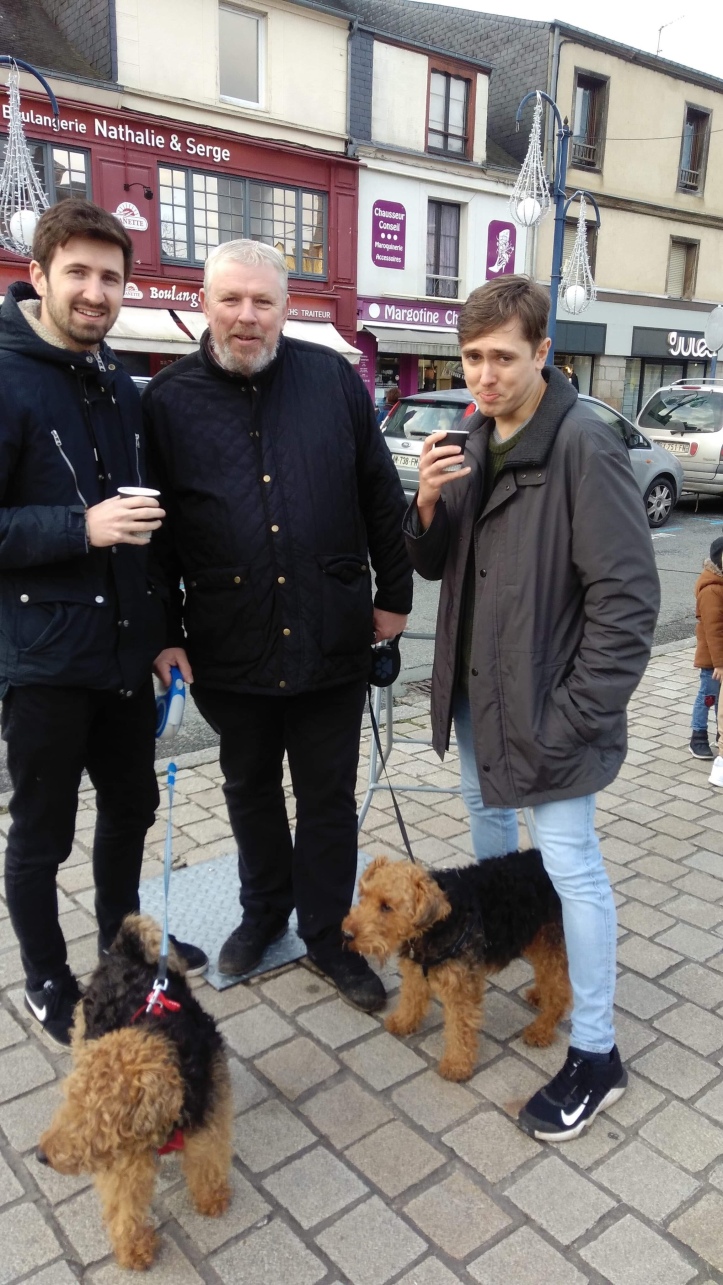 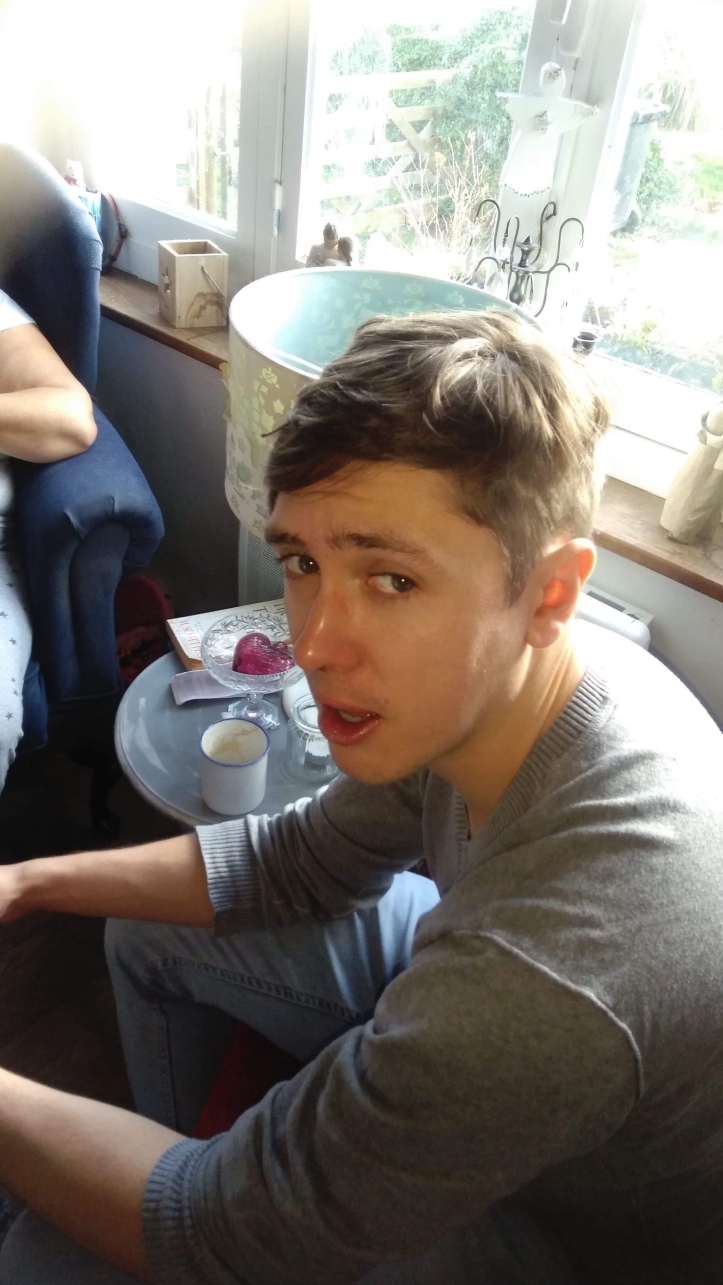 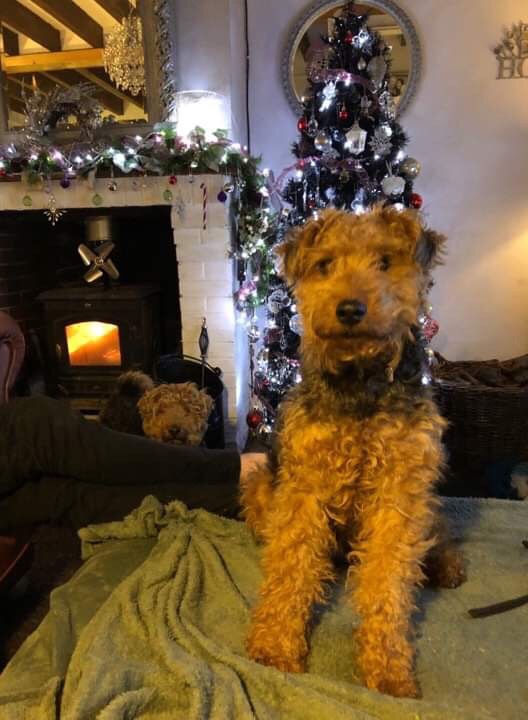 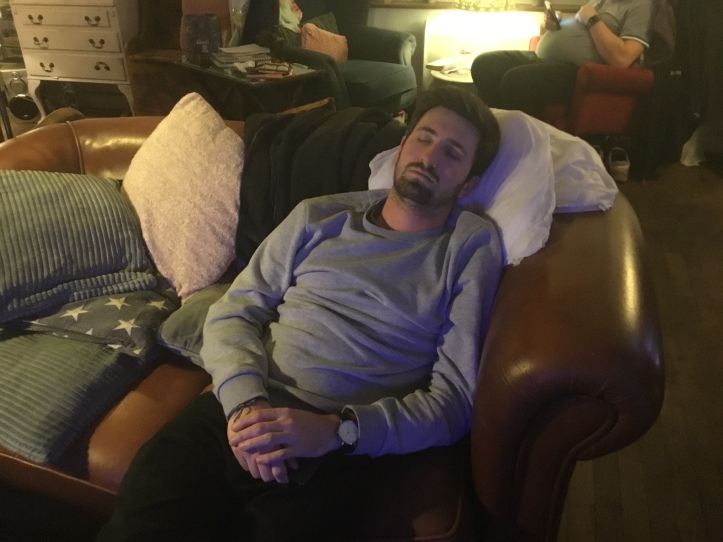